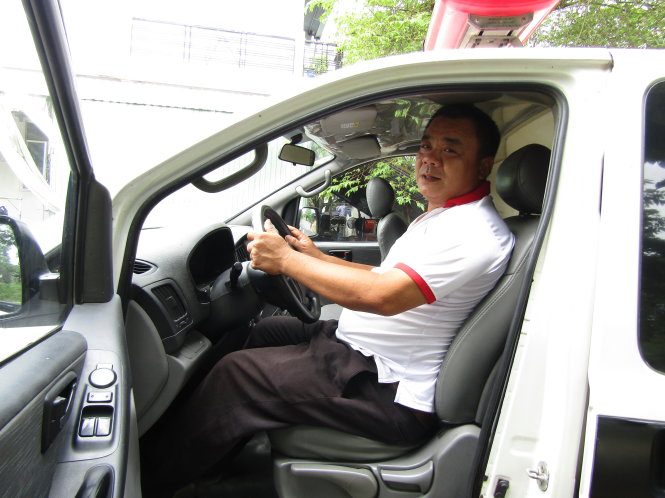 A group of middle-aged men have purchased an ambulance to deliver emergency services for free as a gift to people in their hometown in southern Vietnam.

Nguyen Van Tac, a 49-year-old man living in a remote area in Co Do District in the Mekong Delta city of Can Tho, was the founder of this special ambulance service to help his neighbors get the proper treatment for their sickness as soon as possible.

A member of Tac’s family passed away from a severe disease in 2015 due to the lack of transportation that kept them from rushing him to the hospital in time.

This personal tragedy later motivated Tac to raise a small fund of VND35 million (roughly US$1,500) for purchasing what was then the very first ambulance in the area.

To afford such an amount of money to buy the vehicle, Tac and other ‘founding members’ of the charity ambulance service had saved a little money from their daily work, from farming and raising cattle to cremating death bodies.

“We were so happy that our effort finally paid off," a group member, Dang Van Gioi, said with pride.

Tac’s group has helped a lot of people in their poor hometown ever since offering the complimentary transportation service.

His group managed to take a pregnant woman to the hospital just in time for labor, despite a heavy rain, and succeeded in saving both of them without asking for any favor in return.

“Though I didn’t even know her, I just couldn’t see her in danger without doing anything to help,” said Tac about the memorable incident on a stormy night.

There were also cases where the ambulance had to carry sick or injured people who could not make it.

Among them was an unlucky worker that passed away from electric shock while working.

Tac, along with two other team members, volunteered to take turns in driving for two days without having any rest to take his body back to his hometown in the northern province of Thai Binh, which is more than 1,800km from Can Tho.

Additionally, Tac’s team has raised funds to build charity houses for the poor and provided financial support to help children from disadvantaged families pursue their path of study.

“Thanks to them, my family don’t have to suffer from a leaking roof in the rainy season anymore,” Nguyen Van Linh, a local in Tac’s neighborhood, expressed his gratitude to the charity team for awarding his family a VND40 million ($1,740) house.

The group has been hailed for their kindness and will, while also receiving financial support from philanthropists in Vietnam.

From the very first vehicle, they now have four ambulances and 20 drivers.

Tac said that his team members are always ready to offer their service at any time and they have registered for blood donation and body donation after death to “contribute something to this life.”

“They are special not only for what they have done, but also for their hearts of gold,” said Do Van Quang, the chairman of the Red Cross Society in Tac’s hometown.