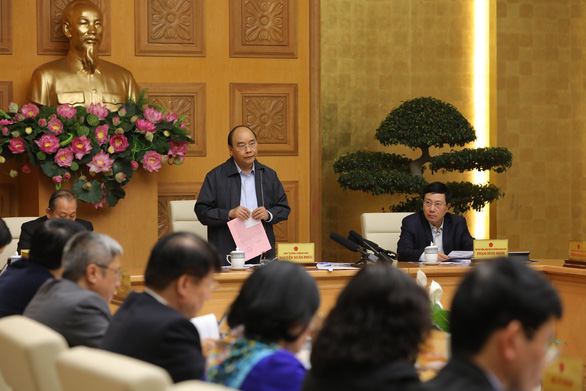 Vietnamese Prime Minister Nguyen Xuan Phuc has ordered government agencies to quarantine all people arriving from areas hit by the novel coronavirus disease (COVID-19) in South Korea to prevent the spread of the epidemic.

The order was given at a government meeting to discuss COVID-19 prevention measures, which was chaired by PM Phuc in Hanoi on Monday afternoon.

South Korean health authorities have reported 893 infections nationwide as of Tuesday morning, making it the largest national total anywhere outside China, according to Reuters.

At the meeting in Hanoi, Vietnam’s Minister and Chairman of the Government Office Mai Tien Dung said that 200,000 Vietnamese citizens currently live and work in South Korea, including 26,000 residing in areas where COVID-19 cases have been reported.

Moreover, Vietnam now adopts a visa exemption policy for South Koreans, making it more difficult to track arrivals from South Korea as passengers can travel from affected areas to non-affected localities before making their entry into the Southeast Asian country, Deputy Minister of Foreign Affairs To Anh Dung told the meeting.

“The risk of the disease spreading from the outbreak zones in South Korea into Vietnam via flights is very high,” Deputy Minister of Health Do Xuan Tuyen stressed.

To solve this problem, Deputy Minister Dung suggested several solutions including placing people arriving in Vietnam from South Korea under 14-day quarantine, and restricting or suspending all flights between the two countries.

“Anyone who arrives [in Vietnam] from outbreak areas must be quarantined,’ PM Phuc affirmed.

He underlined that the government’s key goal is to protect the health and lives of Vietnamese people and not to let the disease spread in Vietnam.

No Vietnamese was ill with COVID-19 in South Korea as of Monday, according to Deputy Minister of Labor, War Invalids, and Social Affairs Le Van Thanh.

Vietnam has already advised its citizens against visiting South Korea’s Daegu City and North Gyeongsang Province – the country’s COVID-19 epicenter – as well as discouraging foreigners from flying into Vietnam via those places.

Vietnam has also required all travelers from South Korea to submit health declaration forms at immigration upon arrival, starting from Sunday afternoon.