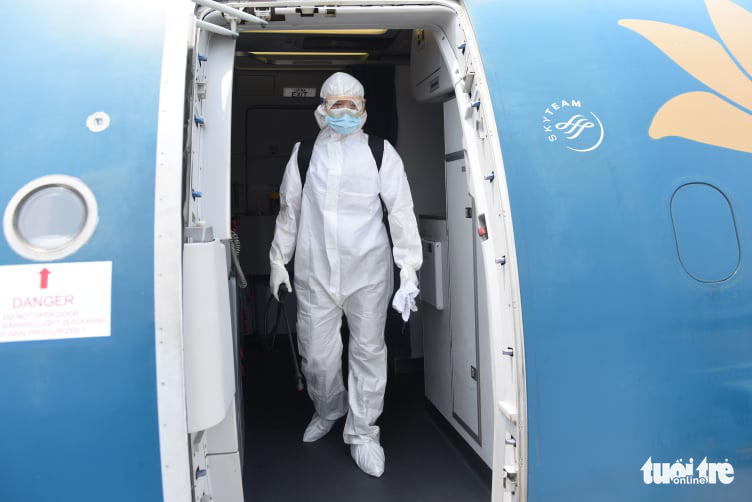 Flight VN0054, which departed from London on March 1 and landed at Noi Bai International Airport in Hanoi at 4:30 am on March 2, carried N.H.N., a 26-year-old woman who has now tested positive for COVID-19.

There were 217 people on the flight, including 201 passengers, four pilots, and 12 flight attendants, according to an official government portal. Twenty-one of them were seated in the same business class as N.

Hanoi authorities previously reported that there were only 197 passengers and crew members on the London - Hanoi flight.

Some passengers on flight VN0054 boarded a connecting flight, VN233, to Ho Chi Minh City on the same day. The flight landed at Tan Son Nhat International Airport in the southern metropolis at 9:54 am on March 2.

All passengers on the two flights are requested to immediately contact the CDC by phone at  0869.577.133 to receive support in carrying out necessary preventive measures as per regulations, it said in an urgent statement issued on Saturday.

N. was on a trip across three European countries, namely the UK, Italy and France, from February 15 to March 1.

N. had reportedly developed symptoms of COVID-19 infection since February 29, but was only taken to the National Hospital for Tropical Diseases in Hanoi at 6:00 pm on Thursday.

She was confirmed infected on Friday evening, becoming the 17th COVID-19 patient in Vietnam and the first case reported in the Southeast Asian country in three weeks.

A Vietnam Airlines representative said on Saturday morning it has quarantined all crew members and ground staff linked to flight VN0054.

The national flag carrier has also provided authorities with a list of passengers on the flight, including those seated next to N.

The area that N. occupied on the plane was “very private” with “limited access”, so close contact with other passengers were minimal, a Vietnam Airlines representative said at a meeting of Hanoi’s COVID-19 prevention committee on Saturday morning.

It is working with competent authorities to collect information regarding the passengers’ travel history, the representative said.

COVID-19, which first surfaced in the central Chinese city of Wuhan in December 2019, has infected over 101,900 people and killed 3,488 globally as of Saturday morning, according to the Vietnamese Ministry of Health.

Vietnam has so far confirmed 17 infections, including the latest case in Hanoi. Fourteen of them are Vietnamese, while the other three patients include two Chinese nationals and one Vietnamese American.

Sixteen of the patients have recovered and been discharged from the hospital. N. was the first confirmed infection in Vietnam since February 13.