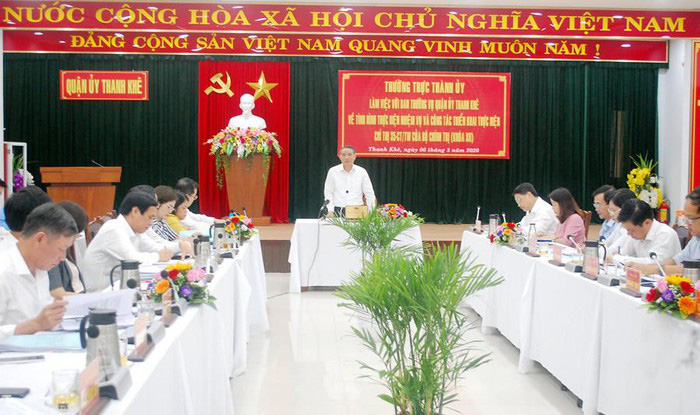 Da Nang Party chief Truong Quang Nghia is under home quarantine after being on the same flight as two British nationals who have tested positive for the novel coronavirus disease (COVID-19), despite his own test results coming out negative.

Nghia boarded a flight operated by national carrier Vietnam Airlines that departed from Hanoi at 9:00 am on March 2 and landed in Da Nang at 10:20 am the same morning.

On the same plane were two British nationals who were confirmed as being infected with COVID-19 on Sunday afternoon.

The Britons had earlier been on flight VN0054 from London to Hanoi with Vietnam’s ‘patient No. 17,’ a 26-year-old Vietnamese woman who had attended crowded fashion events in Milan and Paris prior to returning home.

About a dozen new COVID-19 infections in Vietnam since March 6 have been traced back to patient No. 17.

The British nationals have been placed in quarantine while everyone who has been in close contact with them since their arrival in Vietnam is also isolated and sampled, including the Da Nang Party chief.

Nghia’s test results have come out negative for the novel coronavirus, the municipal Center for Disease Control (CDC) said on Monday.

Nevertheless, he is required to be quarantined at home for 14 days -- the confirmed incubation period of the virus -- from the date of close contact with the Britons as per regulations. The Da Nang leader currently displays no symptoms of illness and is in stable health.

On March 6, Nghia chaired a working session with Party officials in Da Nang’s Thanh Khe District. The meeting was attended by many key Da Nang leaders.

The Ministry of Health on Monday afternoon also confirmed that all members of a delegation of Ministry of Planning and Investment officials who were on the same flight as patient No. 17, with the exception of one man who is Vietnam’s patient No. 21, have tested negative for COVID-19.

All of the officials are now under quarantine with stable health and no symptoms of illness.

It was reported on Saturday that Planning and Investment Minister Nguyen Chi Dung was among the officials on that flight and were seated four rows from patient No. 17 in the same business class.

Three tests had been conducted on his samples as of Sunday, all returning negative, according to the Ministry of Health.

Vietnam has so far confirmed 32 infections, including 19 Vietnamese, two Chinese nationals, one Vietnamese American, eight British citizens, one Mexican, and one Irish national.

Patient No. 17, N.H.N., was confirmed on March 6 after Vietnam had reported no new infection since February 13.

She had traveled to London, Milan, and Paris before returning to Hanoi.

Her older sister, who lives in the UK and attended fashion events in Milan and Paris with N., tested positive for the virus before she did.

A number of Vietnamese celebrities who may have had contact with the two at the events are now in quarantine.

Over 100 people in Vietnam have been placed in quarantine for interacting with N. or with those who had close contact with her.