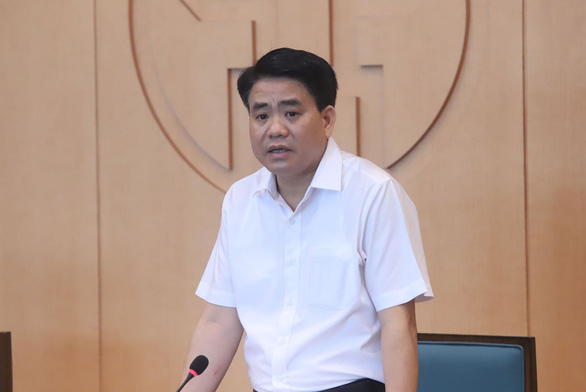 Former chairman of Hanoi Nguyen Duc Chung will continue being in detention for “appropriating documents containing state secrets” even though he already asked for bail to treat his cancer, according to the Ministry of Public Security.

Police and medical staff will take care of his health in prison, Major To An Xo, spokesperson of the ministry, said at a regular press meeting of the government in Hanoi on Friday.

Chung applied for bail to treat his cancer after having been arrested for his involvement in three cases, including the theft of state secrets, Xo added.

“Appropriating documents containing state secrets is a serious crime so we will not change our [detention methods applied to Chung] for the time being,” the spokesperson underscored.

Chung’s health is normal in “new conditions,” he added.

Police investigation is underway into the former chairman’s wrongdoings.

At the Hanoi People’s Council’s 16th session on September 25, delegates agreed to dismiss Chung from his position as chairman of the municipal People’s Committee.

Hanoi's deputy Party chief Chu Ngoc Anh, who is also Minister of Science and Technology, was elected as Chung’s replacement at the same session.

On August 11, Prime Minister Nguyen Xuan Phuc signed a decision to suspend Chung from work for 90 days over his responsibility in the three scandals.

Chung was arrested on August 28, facing allegations of stealing state secrets and being investigated for his responsibility in relation to the so-called Nhat Cuong case, referring to a technology firm and mobile phone vendor in Hanoi, and another case involving violations of regulations on the management and use of state assets in the capital city.

He was named chairman of the People’s Committee of Hanoi on December 4, 2015 after more than a decade of rising through the ranks at the municipal Department of Police, of which he was apppointed director in September 2012.

He was elected as deputy secretary of the Hanoi Party Committee in November 2015. The all-powerful Politburo has suspended him from this title.