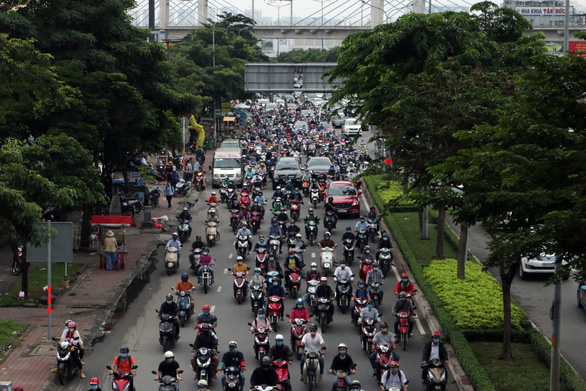 Traffic congestion on a major street connecting the eastern part of Ho Chi Minh City and the city center was exacerbated as a vehicle ban began on a crucial overpass for an upgrade.

Vehicles are banned from traveling on the Nguyen Huu Canh overpass in Binh Thanh District as part of a road upgrade project that will commence in the next two days.

The ban took effect Saturday and will last until March 29.

The Nguyen Huu Canh overpass is a major link for travelers from District 2, District 9, and Binh Thanh District to the city center.

On the weekend, the first two days of the vehicle suspension, traffic on streets adjacent to the overpass, including Dien Bien Phu and Nguyen Van Thuong Streets, was clear. People seemed to be slightly confused when traffic police officers instructed them to take alternative routes.

It was not until Monday morning that the rush-hour jams on these streets got out of hand with the extra traffic from people commuting to work.

At 8:00 am, thousands of vehicles were moving at a snail’s pace through a packed crowd of traffic from the end of the Saigon Bridge to the Hang Xanh intersection, for many people were not familiar with the detours.

Cars were forced to make a U-turn onto Dien Bien Phu Street at its intersection with Nguyen Van Thuong Street, while two-wheeled vehicles had to make a similar move at the Hang Xanh intersection to get to Nguyen Huu Canh Street.

Traffic officers and youth volunteers were hard at work to regulate traffic, but the sheer volume was too much for the streets to handle.

Officials said that they will consider problems that arise in the first five days since the implementation of the ban before commencing upgrade works on the Nguyen Huu Canh overpass.