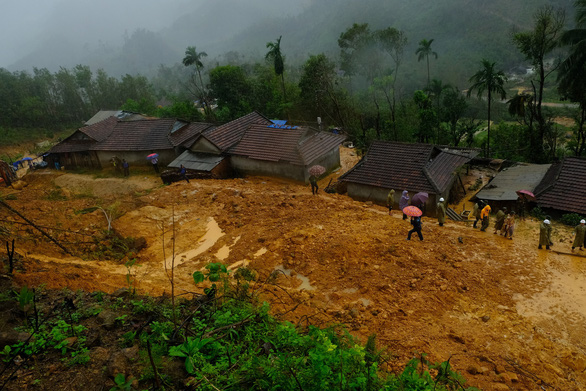 A landslide unleashed massive amounts of mud and rock in the central Vietnamese province of Quang Ngai on Wednesday, threatening several local households and forcing the evacuation of dozens of residents.

The mud began shifting toward the village on Wednesday evening, according to locals.

In response to the landslide, authorities promptly executed a nighttime evacuation of local residents.

“We were sleeping when we heard a loud sound," said Ho Van Hai, a resident of Cua Village.

"We knew it was a mudslide so we ran out of the house.

"It’s fortunate the situation wasn’t worse and authorities were around to help us.”

The mountain where the landslide originated is currently displaying cracks up to 200 meters long with water and mud oozing down its sides.

Local authorities are mobilizing vehicles to clear up the mud pile and continue observing the situation to prevent residents from returning home before danger has passed.

A total of eight households with 47 residents in Tra Hiep Commune have been evacuated.

According to residents, this is the first landslide in the village’s known history.

The landslide stemmed from the construction site of a new road on the mountain.

On Thursday, Dang Van Minh, chairman of Quang Ngai Province, visited the village and spoke with residents whose houses had been damaged during the incident.

He then asked local authorities to restrict residents from returning to the site.

“Food and clothing for victims must be ensured. [We should also] mobilize resources to probe other hills near residential areas in the district and evacuate residents from at-risk areas,” Minh said.

“[We] should not be negligent because rain will continue and worsen the situation."

According to Tra Bong authorities, the locale is home to hundreds of landslide-prone areas.

Relevant agencies have so far evacuated nearly 4,200 residents from about 1,000 households in high-risk areas.

A total of 31 routes in the province have been blocked by landslides, with a combined 40,000 cubic meters of earth spilled from nearby mountains.