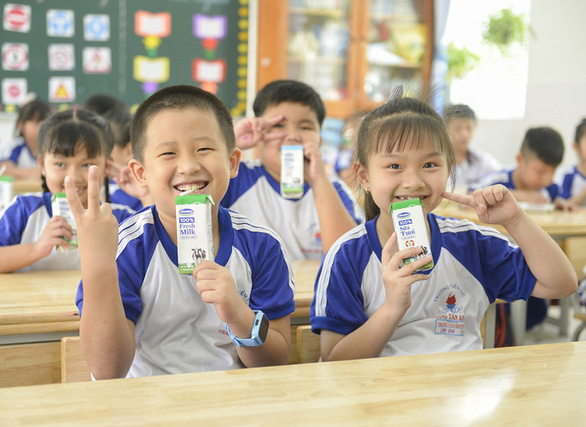 Ho Chi Minh City’s school nutrition program, a project piloted in specific schools during the 2019-20 academic year, will be expanded to 3,600 schools spread across the city’s 24 districts beginning this month.

The announcement was made by Trinh Duy Trong, a representative of Ho Chi Minh City’s Department of Education and Training, during a training session on the implementation of the second phase of the city’s school milk program.

Deemed a project of significance to the community, the school milk program has drawn attention from both city leaders and education officials, Trong affirmed.

After a successful test run in 10 of the city’s districts, the second phase of the program will be implemented in all 24 districts to enhance nutritional care for local students, particularly students in kindergartens and elementary schools.

The initiative saw its official launch at 3,600 kindergartens and elementary schools on Tuesday, offering 180 millimeters of milk a day, five days a week, to each student as recommended by the Ministry of Health.

Vinamilk, the supplier during the first phase of the initiative, won the contract for the second phase after a transparent procurement process.

According to representatives from schools added to the program’s second phase, students and parents alike appreciate the initiative.

“We have heard that the same program was implemented in other provinces and cities and we are wishing that our students would have access to milk at school as well,” said Ly Thi Mai Huong, principal of Truong Cong Dinh Elementary School in Ho Chi Minh City’s District 6.

Meanwhile, parents of students at Rang Dong 11A Elementary School in District 6 also shared excitement about being included in the program, according to principal Pham Thi Ngon.

As with the project’s first phase, the cost for the second phase will be split between the state (30 percent), Vinamilk (20 percent), and parents (50 percent).

Children from poverty-stricken households will be enrolled in the program for free, with costs split between the state coffers and Vinamilk.

During phase one, which lasted from November 2019 to October 2020, students attending 1,600 schools in 10 of the city’s districts were able to participate in the program.

Enlisted in this phase were schools in outlying areas with high concentrations of internal migrant households who earn a living at industrial zones and manufacturing facilities.

Despite a disruption during the COVID-19 pandemic, the program was reinstated in most schools after the resumption of classes.

Over 14.4 million boxes of milk were delivered to students in the first phase of the project.

Similar projects have been undertaken in 25 other provinces and cities in Vietnam, including Hanoi, Quang Nam, Da Nang, Quang Ngai, Binh Dinh, and Vinh Long.