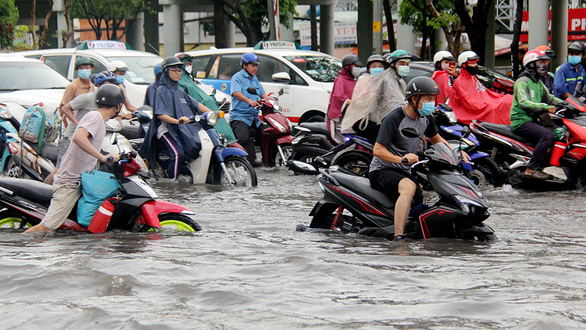 District 12, Thu Duc District, Nha Be District, and Binh Chanh District have been named as the neighborhoods most susceptible to natural disasters in Ho Chi Minh City.

The finding was detailed in Ho Chi Minh City’s Action Plan on Climate Change for 2021-30 with a vision to 2050.

According to Bui Chi Nam from the Sub-Institute of Hydrometeorology and Climate Change (SIHYMECC) under the Ministry of Natural Resources and Environment, the impacts of climate change will likely be felt most in Ho Chi Minh City’s Binh Chanh, Cu Chi, Binh Thanh, Thu Duc, and Go Vap Districts, as well as District 12.

The report also noted Thu Duc and Cu Chi's high adaptability to climate change will likely allow them to cope with climate-related dangers.

Le Anh Ngoc, an associate at SIHYMECC, shared several climate change scenarios for Ho Chi Minh City, with most involving steep increases in temperature and precipitation in the coming years that would likely hit the city’s northwestern to southeastern areas hardest.

Despite the city’s current flood control infrastructure, around 134,840 hectares of Ho Chi Minh City is projected to become inundated in the near future due to rising sea levels and other climate change hazards.

This phenomenon is already being recorded across the city during the Saigon River’s high tides.

Tide levels in the city hit a new record in 2019, with Nha Be Station documenting water levels at 1.8 meters and Phu An Station at 1.7 meters during peak tides.

Saltwater intrusion is also continuing to move further upstream on the Saigon River, endangering the supply of fresh water for city residents.