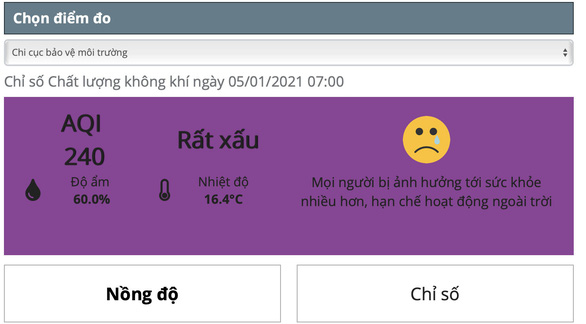 The Air Quality Index (AQI) recorded in Hanoi on Tuesday indicated a "very high" level of pollution, which poses significant threats to the overall health of local residents.

As witnessed at 7:15 am on Tuesday on the air quality tracking app PAM Air, the majority of monitoring stations in Hanoi reported purple and brown signals, which corresponds to “very unhealthy” and “dangerous” warnings on the AQI scale.

In the meantime, many air quality monitoring stations under the system of the Vietnam Environment Administration and the Department of Natural Resources and Environment registered an AQI of as high as 240, which reached the “very unhealthy” alert.

An AQI readout between 201 and 300 indicates “very unhealthy” air quality, while levels from 301 to 500 are considered “dangerous” in terms of air pollution.

According to the Vietnam Environment Administration, pollution at “unhealthy” and “very unhealthy” levels poses adverse health effects on vulnerable demographics, including the elderly, children, as well as people with preexisting respiratory and cardiovascular problems.

Monday’s data from 10 monitoring stations of the city’s Department of Natural Resources and Environment also indicated deterioration of air quality in the city.

The department also called on all commuters to adhere to traffic law to help inhibit exhaust from traffic congestion, and residents in suburban areas to reduce the burning of domestic waste and agricultural by-products.

Orchestration of traffic at hotspot areas, such as Minh Khai Street, Pham Van Dong Street, and Hang Dau Junction should also be strengthened, the department suggested.

On Tuesday, the department advised residents to “curb outdoor activities” as the air pollution situation was exacerbated.

Commuters are recommended to wear face masks and protective glasses while entering traffic.