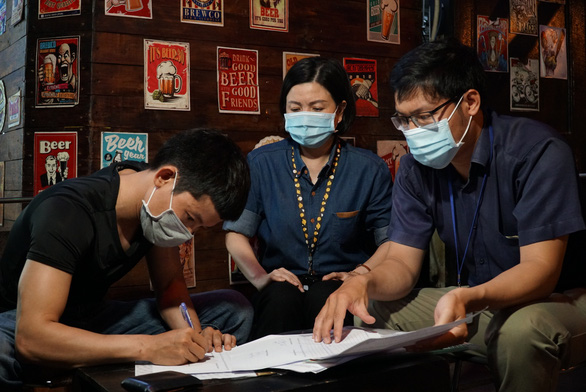 Confronted by the task force, Huyen agreed to sign the commitment form, which requires her facility to curb music volume and relieve noise pollution for the neighborhood.

“Music is a major factor that draws customers to beer businesses, we can’t operate without it,” Huyen explained.

“However, as authorities required, we would tone down the music.”

Meanwhile, Nguyen Van Thiet, an executive of Havana Coffee & Beer on Pham Van Dong, said beverage stalls in the area should all be required to turn down their music volume.

“My facility goes for a laid-back atmosphere, yet the surrounding establishments always play ear-piercing music that ruined the ambience in my place,” Thiet complained.

“I hope that other places lower their volume so I can do the same to mine.”

As per the new proposal of Binh Thanh District, the telling-off approach for noise violations will only be kept until the end of May, as administrative penalties will be introduced to punish disobedient businesses starting from early June.

The campaign will also target households and individuals who play loud music and karaoke to the point of overstepping noise regulations.

According to the national technical standards, noise in residential areas must not surpass 50 decibels from 9:00 pm to 6:00 pm, while noise output that exceeds 70 decibels during the rest of the day is also not acceptable.

Earlier this month, leaders of Ho Chi Minh City reached a consensus on the launch of a sweeping campaign against noise pollution in residential areas in 2021.

During the first phase of the drive, which runs till May, the city will focus on promoting messages and regulations against noise pollution among the community.

“We are striving to achieve economic development and raise living standards for the people, which is why noise pollution, among other issues that impact the urban environs, should be thoroughly addressed,” said Vo Van Hoan, deputy chairman of the Ho Chi Minh City People’s Committee, during a city-level meeting last week to identify solutions for dealing with urban noise pollution.