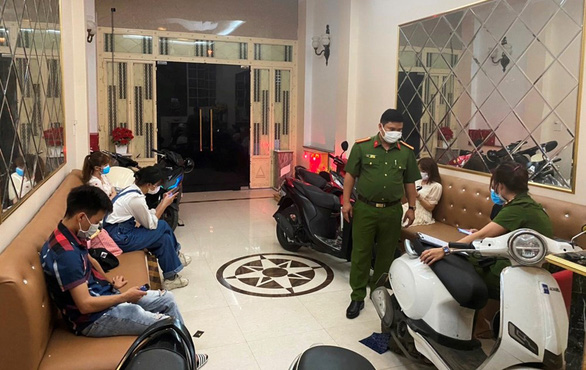 Police in Vietnam caught red-handed a karaoke parlor serving four South Korean guests on the weekend despite its commitment to temporarily shut down the bar for the sake of COVID-19 prevention.

The case was uncovered when a police team raided this establishment in Ngo Quyen District, Hai Phong City at 10:30 pm on Sunday.

Four Korean guests and a Vietnamese female employee were singing in a room on the second floor of the parlor when police officers arrived.

They were also found using nitrous oxide, known as laughing gas, in the room, police said.

At the reception counter on the first floor, five other female employees were waiting for guests.

It had serviced guests for several consecutive days before the swoop, Nguyen Phuong Anh, an employee of the bar, admitted.

The bar had received a notice from the municipal People’s Committee regarding preventive measures against COVID-19 and had signed a commitment to suspend its operations under local authorities’ directions for pandemic prevention, Anh said.

Vietnam has confirmed 442 domestic cases in 26 provinces and cities since April 27, after it had gone about a month detecting zero infections in the community, according to the Ministry of Health’s statistics.

The country has documented 3,444 local and imported COVID-19 infections as of Monday afternoon.

Recoveries have hit 2,602 while virus-related deaths have remained at 35 for months.