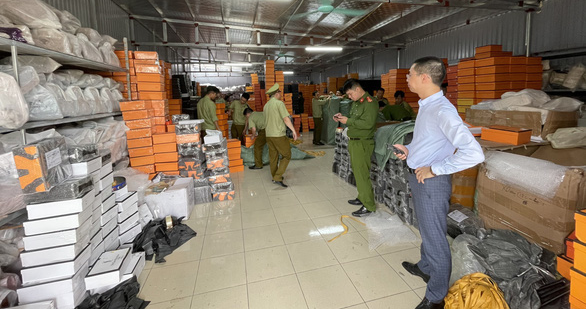 Drugs, counterfeits discovered in cargo containers in transit in Vietnam

Customs officers have uncovered a great amount of fake goods and narcotics hidden in more than 90 cargo containers in transit in Vietnam.

Customs inspectors nationwide detected a lot of counterfeit items and drugs concealed in 91 out of the 132 in-transit containers of goods during their weeklong inspections in July last year, the Ministry of Finance reported.

These 132 containers accounted for about 20 percent of the total number of in-transit cargo containers during the inspection period.

Of the 91 containers in question, 35 contained counterfeit goods of famous brands and the rest were flagged for undeclared or falsely declared commodities.

Customs officers in northern Lang Son Province detected 7.5 metric tons of drug precursors stashed in an in-transit container and 15.8 kilograms of methamphetamine concealed in another.

Vietnam currently has 129 enterprises engaged in transiting goods from China to Laos and Cambodia, with tens of thousands of cargo containers handled per year, the ministry reported.

The Huu Nghi border gate in Lang Son Province and the Saigon Port in Ho Chi Minh City handle up to 150 containers of general cargo in transit for delivery to Cambodia and Laos daily, mainly by road.

The ministry has included these findings in its recent report to the prime minister in response to a proposal by enterprises that call for streamlining the handling of goods in transit in Vietnam.

The transit of goods through Vietnamese territories generates jobs to locals and brings revenue to logistics enterprises, but it also poses the risk of circulation of banned goods or commodities infringing on intellectual property rights, among other problems, the ministry said.

It also warned that such illegal merchandise might even return to Vietnam for consumption after being transported to third countries.

The ministry has directed the General Department of Vietnam Customs to assess the risks of infringements related to goods in transit based on specific criteria, including commodity classification and transport routes.