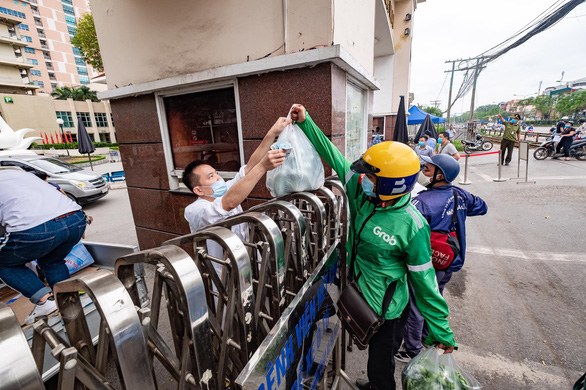 The Hanoi Department of Transport on Saturday ordered a ban on all public transport services, including buses, taxis as well as passenger and delivery services on ride-hailing apps, as part of a strengthened social distancing mandate to combat a new wave of COVID-19 transmissions.

The ban was mentioned in an official document sent from the transport authority to companies providing transport and delivery tech solutions in the capital city, including Grab, Be Group, Gojek Vietnam, Logistics Viettel, and FastGo Vietnam.

The proscription was rolled out in line with Hanoi’s reintroduction of the prime minister's Directive No. 16, which orders non-essential businesses to close, and requires city dwellers not to leave their houses unless for food, medicine, emergencies or duties at essential businesses such as state agencies, factories, essential shops and service providers, starting 6:00 am on Saturday.

The municipal transport department added that all tech-based passenger and package delivery services must be shuttered, save for those that serve the city’s epidemic prevention effort, public missions, diplomatic purposes, or the conveyance of workers and experts.

Only specified vehicles, including those transporting essential items to cater for the city’s demand, inter-provincial automobiles traveling on approved routes, and passenger transport services for public missions will be given a travel pass during this social distancing period.

Dedicated delivery teams of supermarkets and convenience stores are also to be given the green light to distribute essential items to customers, Vu Van Vien, director of the Hanoi Department of Transport, told Tuoi Tre (Youth) newspaper on Saturday.

City authorities are looking to keep 180 taxis of transport firm Mai Linh running, with 3-5 designated vehicles in each district, to prepare for emergency situations,Vien added.

This is the second time that Hanoi has resorted to the stringent Directive No. 16, the first being in April 2020, which lasted for nearly a month.

The added measures are the city’s response to the adverse development of the fourth — and gravest — wave of coronavirus infections, which emerged in late April and has infected 899 city dwellers so far.

The National Assembly, the country’s lawmaking body, decided to cut short its meeting in Hanoi by three days to end on July 28 due to the outbreak.