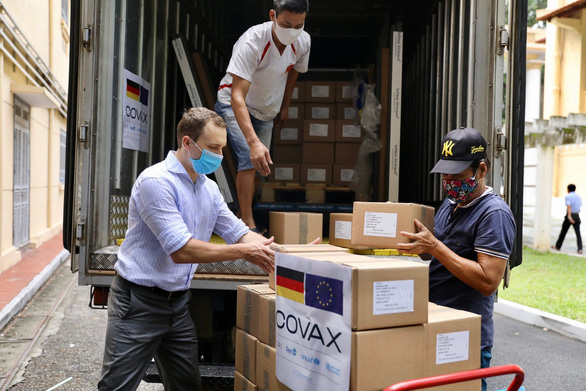 A shipment of 852,480 AstraZeneca COVID-19 vaccine doses donated by the German government arrived in Hanoi on Thursday, amid Vietnam’s acceleration of immunization to drive back the pandemic.

This is a contribution from Germany toward the Vietnamese vaccination campaign, the German Embassy in Hanoi said in a press release the same day.

The donation is part of the 2.5 million AstraZeneca vaccine doses Germany has previously promised to donate to Vietnam.

The vaccine jabs were delivered to Vietnam through COVAX Facility, in close cooperation with UNICEF and WHO Vietnam and the Vietnamese government.

“I am very happy about this delivery of German vaccines via COVAX," said Dr. Guido Hildner, German Ambassador to Vietnam.

"Germany stands with Vietnam in fighting and overcoming the COVID-19 pandemic."

The diplomat said Germany and the European Union support the COVAX scheme for fair and transparent access to COVID-19 vaccines worldwide.

“We can only defeat the pandemic if it is brought under control everywhere,” Hildner said.

With this shipment, Vietnam has so far received 12,578,110 doses of COVID-19 vaccine through the COVAX Facility.

“On behalf of the UN family, we thank the government and people of Germany for sharing with the Vietnamese people these life-saving vaccine doses sent through the COVAX Facility," said Dr. Kidong Park, United Nations resident coordinator ad interim and WHO representative in Vietnam.

In addition to Germany, Vietnam has earlier received vaccine donations from many other countries, including the U.S., Japan, Russia, and China, among others.

Vietnam has targeted to secure 150 million vaccine doses to vaccinate two-thirds of its 98 million population, but it has got so far only 37 million jabs from different sources, including the COVAX Facility, contract purchases, and donations.

Health workers have administered around 32.3 million vaccine doses, including 715,550 shots on Wednesday, since inoculation was rolled out on March 8.

The health ministry documented 10,901 recoveries on Thursday, bringing the total to 423,551.

The toll has soared to 16,425 deaths after the ministry logged 239 fatalities on the same day, including 160 in Ho Chi Minh City and 46 in Binh Duong Province.