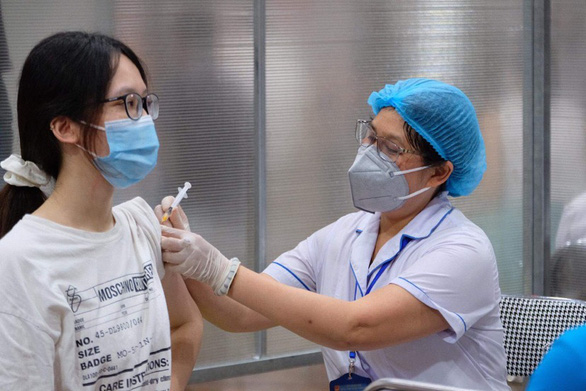 Health authorities in Hanoi have agreed to reduce the interval between two AstraZeneca COVID-19 vaccine shots to at least four from eight weeks, with a view to expediting inoculation.

The city’s Department of Health on Sunday announced its approval for the Hanoi Center for Disease Control’s (Hanoi CDC) proposal to cut the vaccination gap to speed up the immunization process in a safe and effective way.

The proposal has been based on the guidance of the National Institute of Hygiene and Epidemiology, which recommends that the second AstraZeneca vaccine shot be given four weeks or more after the first jab.

According to the manufacturer’s instructions, the second dose should be given between four and 12 weeks after the first, while Vietnam chose to follow the World Health Organization's recommendation on an interval of eight to 12 weeks.

In late September, Ho Chi Minh City shortened the gap between two shots of the vaccine to at least six weeks, with the same target to accelerate immunization coverage for all residents.

As of Sunday, Hanoi, with a population of eight million, had administered around 6.12 million first doses and some five million second jabs, according to the national COVID-19 vaccination portal.

About 93 percent of the capital city's residents aged 18 and above have got their first vaccine dose, and some 70 percent of this age group have received two full shots, the Hanoi CDC reported.

Around one million people over 50 are still waiting for their second vaccine shots, said Tran Thi Nhi Ha, director of the municipal health department.

Hanoi aims to give COVID-19 vaccine to over 95 percent of local children aged 12 to 17 who are eligible for vaccination.

The child vaccination drive will kick off as soon as Hanoi receives a vaccine allocation from the Ministry of Health, with the first supply expected to be available from now to the end of this year.

The country, with a population of 98 million, has received around 125 million COVID-19 vaccine shots out of the 200 million jabs that have been contracted so far, according to the ministry.

Since the pandemic hit the country in early 2020, Hanoi has documented 6,489 cases including 41 deaths, the ministry’s data shows.

The Southeast Asian country has recently seen its daily mortalities drop remarkably, to 64 on Sunday from 276 two months earlier, notwithstanding its infections gradually climbing again from mid-October, the ministry reported.

The Vietnamese government has eased COVID-19 restrictions to reopen the economy in ‘new normal conditions,’ a reference to living safely with the coronavirus, since early October.