Police in Bac Giang Province, northern Vietnam arrested four suspects who were accused of assaulting a porter to death at Quang Chau Industrial Park on Thursday.

The victim was N.H.T., a 38-year-old man hailing from Lang Son Province, also in the northern region, and the four detainees are men aged 20 to 26, local police reported.

Police officers seized a knife that had been used in the killing.

At noon on Thursday, police of the province’s Viet Yen District were notified of a fight that broke out outside the entrance of a foreign company in the park.

A police team rushed to the scene and found T. lying dead in front of the company.

After launching an investigation, police arrested the four men.

T. was a stevedore of a transport company that was delivering machines to the foreign firm, according to initial police reports,

The assault occurred out of the personal conflicts between T. and the four men, who were armed with knives and canes.

During the fight, 22-year-old H. V. N., one of the attackers, stabbed T. with a knife to death, reports said.

Local police are continuing their investigation into the case. 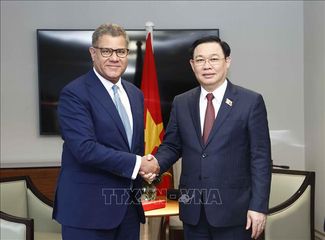