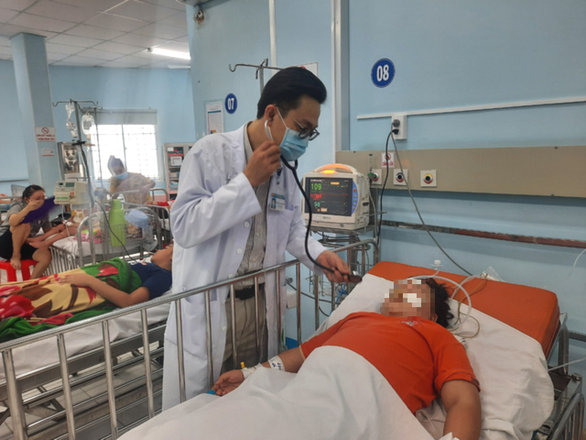 Dengue fever is entering its peak in Ho Chi Minh City this year, with the number of cases amounting to 2,181 just last week, up 38.5 percent from the prior four-week average, the city’s Center for Disease Control (HCDC) reported.

The total includes 1,182 hospitalized cases and 999 outpatients, an increase of 25.9 percent and 57.1 percent, respectively, the HCDC said.

The City Children’s Hospital received 74 child patients, including eight critical cases last week, while the corresponding figures at Children’s Hospitals 1 and 2 were 74 and 8, and 89 and 21, according to the Department of Health.

The Ho Chi Minh City Hospital for Tropical Diseases treated 373 dengue fever cases in the same period, including 264 adults and 109 children, of which 45 were severe.

From early this year until last week, the city documented 16,057 dengue cases, up 117.3 percent year on year.

There have been nine deaths from the disease this year, a rise of seven compared to last year, Thanh Nien (Young People) newspaper cited the HCDC.

Emphasizing that dengue is entering its peak, the agency asked all health facilities to closely follow the guidelines for diagnosis and treatment of the disease in a timely manner in order to detect cases and effectively treat patients.

Nationwide, there had been 62,955 cases and 29 fatalities, up 97 percent and 5.8 times, respectively, compared to the same period last year, the Ministry of Health reported on Thursday.

The ministry has sent seven working groups to different regions across the country to help local health authorities cope with the epidemic.

As dengue fever is transmitted from person to person through mosquito bites, the most effective measure to prevent the disease is to kill mosquitoes and minimize their habitats, including places of slow-moving or stagnant water, doctors said.

Typical symptoms of dengue fever are high fever for two to seven days, accompanied with signs of hemorrhage such as petechial spots, teeth or nose bleeding, bruises, and abnormal vaginal bleeding in pubertal girls, according to the HCDC.

Children with high fever for two or three consecutive days should be taken to a medical facility for examination and diagnostic testing for dengue fever, doctors said.

A large outbreak of dengue fever may appear every four or five years, epidemiologists said, adding that Vietnam recorded such an outbreak in 2019 with more than 300,000 dengue cases, including around 65,000 patients in Ho Chi Minh City.