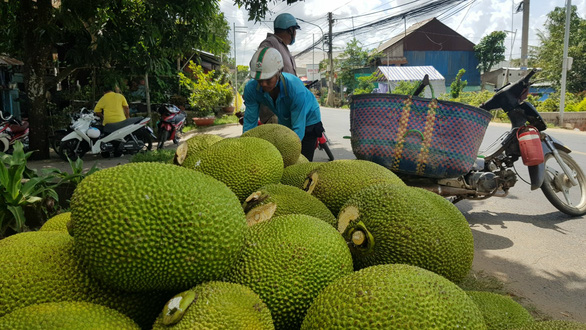 The farm gate prices for Thai jackfruit in Vietnam's Mekong Delta have dropped by VND2,000-3,000 (8-12 U.S. cents) per kilogram, but farmers are still struggling to find buyers, forcing many to leave jackfruits piling up in their gardens or use the crop as animal feed.

Hoang Van Linh, a resident of Cai Lay District of Tien Giang Province, said his garden is full of ripe jackfruits, but traders simply are not interested.

Linh has resorted to giving the harvest to family and friends.

He switched from growing durians to jackfruits in 2016 when saltwater intrusion began affecting his growing operation.

“The Thai jackfruit trees on my farm are bursting with ripe fruits, but no one wants them,” complained Nguyen Van Tu, another farmer in Cai Lay District.

Three years ago, when jackfruit prices were at VND40,000 per kilogram, Tu’s family was able to earn about VND5 million ($215) per week from their 200 Thai jackfruit trees.

Tai, a resident of Tan Chau Town in An Giang Province, shared that plummeting prices have fueled anxiety among jackfruit farmers and many are now using their crop to feed fish.

Three years back, when farmers were able to sell their jackfruits for VND8,000 (34 U.S. cents) per kilogram to VND30,000 ($1.3) per kilogram, Tai converted a hectare of his land to a jackfruit orchard.

He was able to sell his first crop for VND15,000 per kilogram, but prices slowly began trending downward until they hit the current rates of just VND2,500-3,000 per kilogram.

“In recent days, we have been using our jackfruit to feed fish. Maybe, I will have to cut down my jackfruit trees and switch to growing longans,” Tai added.

According to Le Quoc Dien, deputy director of the Department of Agriculture and Rural Development in Dong Thap Province, the steep decline in jackfruit prices can be attributed to China’s current prohibition on jackfruit imports and famers failing to plan around the ban.

“Local authorities are calling on investors to build jackfruit processing factories to help with the consumption of the fruit, as well as recommending that local farmers switch to cultivating other plants.”

The phenomenon of growing Thai jackfruits en masse reportedly originated from the provinces of Tien Giang and Ben Tre in the delta to replace plants impacted by saltwater intrusion such as durians, rambutans, and star apples.

It later spread to other localities in the region such as Dong Thap and An Giang.

Tien Giang is among the largest localities in the region in terms of total jackfruit farming area, with over 15,000 hectares dedicated to the fruit and an annual output of around 270,300 metric tons.

Dong Thap has 8,500 hectares of jackfruit trees and An Giang has more than 2,000 hectares.

An abundance of lychees has made its way to Ho Chi Minh City despite plunging prices.

According to many lychee vendors, the supply has risen sharply since early-June and the price of the fruit has since dropped by 30-40 percent.

These prices are expected to continue falling as Bac Giang Province in northern Vietnam enters its harvest season.

Major supermarket chains such as Saigon Co.op, Bach Hoa Xanh, and MM Mega Market said they plan to launch sale programs to facilitate lychee consumption as the supply is expected to rise sharply.

A representative of Thu Duc Agromarket, a major wholesale market in Ho Chi Minh City, said 200 metric tons of lychees are delivered to the market every night, a tenfold increase compared to early June.

Since the start of the lychee season, around 7,500 metric tons of lychees have arrived at the market.