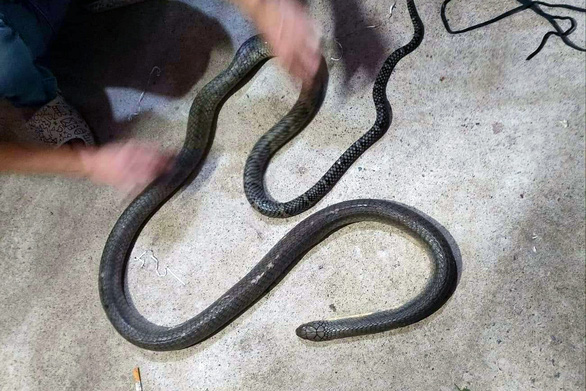 A 65-year-old man from Dong Nai Province, southern Vietnam passed away after he was bitten by a venomous snake, which he was attempting to catch using bare hands last week.

The victim was Tran Van Can, 65 years old and living in Phu My 2 Hamlet, Phu Dong Commune.

Can, his son, and several other locals came to assist in catching the snake that entered a neighbor's home to attack chickens last Sunday.

He used his bare hands to capture the reptile because he believed it was a nonvenomous oriental rat snake.

The snake bit his hand after he covered its head with a sack.

However, he did not seek medical treatment until his hand was badly bruised and necrotic, at which point his family rushed him to Cho Ray Hospital in Ho Chi Minh City for emergency treatment.

Due to the delay in getting to the hospital, the snake poison spread into Can's kidney, causing him to go into a critical condition.

Can passed away early on Tuesday morning after being returned to his home following his family's wishes.

Sang cautioned that those who lack experience or information about snakes should not capture them arbitrarily.

In case of a snakebite, immediate inspection and treatment at the nearest medical facility are required to prevent tragic outcomes.