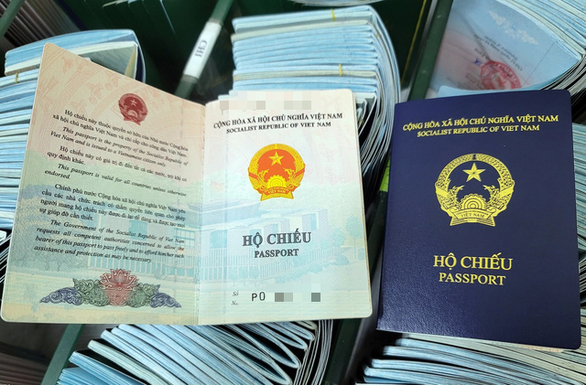 The Spanish Embassy in Vietnam has temporarily suspended granting Schengen visas, short term visas for tourism or business purposes, to holders of Vietnam’s new passports put into use on July 1.

This is the second suspension applied by foreign countries to these passports.

The embassy announced on Monday that visa granting would be halted until further notice, saying that the new Vietnamese passports, in blue-violet color, do not provide information on the place of birth, which is displayed in the old passport in green color.

Therefore, the embassy will suspend receiving applications for Schengen visas from holders of the new Vietnamese passports until the central authorities in the Schengen Area make a decision on whether to accept the new passport form of Vietnam.

Schengen visa applications with old Vietnamese passports that are not expired will still be accepted and processed as usual, the embassy said.

Tran Thi Huong, first secretary of the Vietnamese Embassy in Spain, said the agency is coordinating with relevant agencies in Vietnam in addressing the problem.

Vietnamese agencies should discuss this issue in detail with the Spanish side so that they can find a solution acceptable to both sides, Huong said.

The Vietnamese Embassy in Spain will give notices and instructions to holders of the new passports after it reaches relevant agreements with the Spanish side, Huong said, adding that new passport holders should remain calm.

On July 28, the German Embassy in Hanoi also said it could not grant visas to holders of the new passports since their identities could not be verified without the place of birth.

One day later, the Vietnamese Embassy in Germany announced its free issuance of birthplace certification to holders of Vietnam’s new passports to help them obtain residence permits and carry out other administrative procedures in Germany.

Chu Tuan Duc, counselor at the Vietnamese Embassy, said that the embassy will continue issuing Vietnam’s new passports attached with a birthplace certificate.

The embassy and the Vietnamese Ministry of Foreign Affairs have asked relevant German agencies for coordination to solve the problem based on the spirit of the Vietnam - Germany strategic partnership.

An official from the Immigration Department under the Ministry of Public Security told Tuoi Tre (Youth) newspaper last week that Vietnam’s new passports comply with international regulations and practices.

Under the International Civil Aviation Organization (ICAO)’s passport standard set, which is accepted by many countries, the place of birth of the passport holder was not mandatory.

According to a quick survey by Tuoi Tre, there are many passports of other countries that do not show the holder’s place of birth, such as the one issued by South Korea.