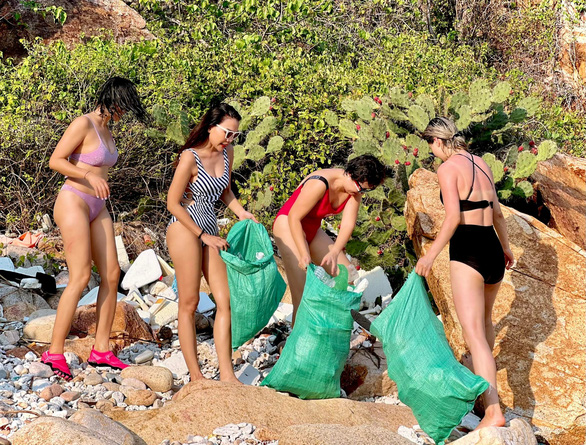 A group of tourists from Ho Chi Minh City have filed a complaint with relevant agencies following reports by a newspaper that local authorities found the swimsuits they wore while cleaning a local beach in Ninh Thuan Province, south-central Vietnam to be offensive.

On Wednesday, a local newspaper reported that the Management Board of Nui Chua National Park was coordinating with the People's Committee of Vinh Hai Commune, Ninh Hai District, Ninh Thuan Province to reprimand a group of tourists for wearing bodysuits while picking up trash on a local beach.

The Management Board of Nui Chua National Park was quoted in the article as saying that the tourists' behavior was “offensive.”

Netizens were taken aback by the report, with many confused as to why park authorities were upset that people chose to wear swimsuits on a beach.

Ngo Nhu Quynh, one of the tourists involved in the incident, told Tuoi Tre (Youth) newspaper that the group's goal was to clean the beach and swimsuits seemed like appropriate beach attire.

“We were at a beach so swimsuits were an obvious choice.

“We thought that cleaning the beach would be a meaningful experience and hoped other tourists at Vinh Hy would join us.

"We also took photos to help us remember the experience."

After posting those photos on Facebook, Quynh and her friends received praise from the public, but were surprised when a local newspaper reported that the Management Board of Nui Chua National Park and the People's Committee of Vinh Hai Commune, where Vinh Hy is located, were upset by their actions.

In fact, Quynh and her friends Tran Quang Vinh and Bui Thi Anh were amazed by the report that they filed a complaint to relevant authorities to seek clarification on the matter.

They have also considered hiring a lawyer in order to explore the possibility of filing a defamation claim.

In response to the incident, Nguyen Thanh My, secretary and chairman of the People's Committee of Vinh Hai Commune, said on Wednesday night that he had heard of a group of tourists picking up trash in Vinh Hy Bay while wearing "inappropriate attire," but was not aware of specifics.

“The information wasn’t clear at first so I would look into the incident and, if [the photos] were offensive, I'd ask whoever uploaded them to take them down," My said.

“During an inspection, I saw that the group had been cleaning up garbage at the beach in order to help protect the local environment.

“The area where they were was far from residential areas, and there is a lot of waste on the beach and on the mountain."

Tran Van Tiep, director of the Management Board of Nui Chua National Park, has yet to issue a statement regarding the incident.