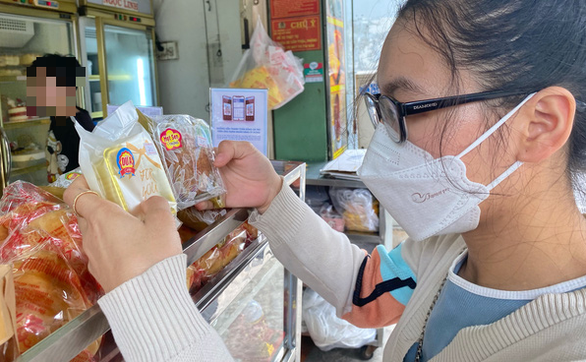 Various kinds of mooncakes with wholesale prices hovering around VND2,000-4,000 (US$0.09-0.17) apiece have been imported in large volumes from China into Vietnam ahead of the Mid-Autumn Festival.

The ingredients in mooncakes can easily go bad if they are not well preserved, posing a high health risk to consumers, according to experts.

Meanwhile, designated agencies find it hard to control the quality of these products.

As the Mid-Autumn Festival approaches, the mooncake market is always bullish.

Her products are available for any request.

"No one offers lower prices. With only over VND100,000 [$4.3], customers can buy tens of mooncakes with different flavors. Customers buy a lot,” Hong affirmed.

However, she admitted that the cakes were smuggled without documents when she was asked to prove the origin and quality of the products.

Meanwhile, Hanh, who called herself a distributor of Chinese mooncakes in Hanoi, said over the past month, she had sold some 600 five-kilogram boxes of Chinese mini mooncakes at VND380,000 ($16.3) per box.

Each box includes mooncakes with more than 10 flavors, such as sticky rice cakes, and those with pineapple or coconut stuffing.

“The products are very cheap and diversified, so customers in many localities prefer them to locally-made mooncakes,” Hanh noted, adding that many other sellers introduced their cakes as being imported from Taiwan, Hong Kong or South Korea, but she admitted the products were sourced from mainland China.

The mini cakes have been transported to the southern region in large volumes.

When customers were concerned over the shelf life of the cakes, Thuan said, “I bought the cakes from Hanoi over a month ago and my customers can keep them for two more months.”

“It is unbelievable that they can produce such cheap mooncakes,” said Ngo Van Huu, owner of a mooncake producing plant in Ho Chi Minh City.

“It is hard for domestic enterprises to produce mooncakes, even mini ones, at such low prices.

“It costs tens of millions of Vietnamese dong to transport a shipment of mooncakes from China to Vietnam, and VND20,000-40,000 [$0.9-1.7] per box from Hanoi to Ho Chi Minh City, regardless of fees for changing hands.

“Thus, the original prices of the cakes in China are definitely much lower."

According to an expert in the food sector in Ho Chi Minh City, homemade mooncakes, such as fresh and sticky rice cakes, often have a short shelf life, normally four to ten days.

Therefore, consumers may easily buy poor-quality mooncakes if they are not well preserved.

Sticky or baked cakes produced in an industrial manner can have a shelf life of 1-1.5 months.

If China-originated sticky rice mooncakes are kept for many months as advertised by sellers, buyers should take caution.

A representative of the Food Safety Management Authority of Ho Chi Minh City told Tuoi Tre that the authority was working with districts in the city to inspect mooncake producers and sample cakes to check their quality and prevent substandard products from being launched in the market.

According to a representative of the Ho Chi Minh City Market Surveillance Agency, imported mooncakes on sale must be attached with a Vietnamese label.

In addition, importers must prove the origin of the products through invoices, import declarations, and food safety certificates. Nevertheless, it is not easy to control all products.

Tran Thi Minh Hanh, head of the ward of nutrition and dietetics at Hoan My Saigon Hospital, said the key ingredients to make mooncakes, such as oilseeds, eggs, milk, and cereals are susceptible to contamination and mold.

Therefore, the quality of mooncakes will be easily affected if production and preservation conditions are not good.

“If cakes are made of contaminated or molded materials, people can suffer severe poisoning, adversely affecting their organs, such as the liver and kidneys, and posing a risk of cancer,” Hanh warned.

Be careful with homemade mooncakes

Homemade mooncakes are preferred in Ho Chi Minh City, but they are mainly sold without packages, labels, and proof of quality control.

Having sold more than 400 homemade mooncakes at VND20,000-50,000 ($0.9-2.1) each, Ngo Thi Hang, owner of a homemade mooncake producing unit in Binh Thanh District, said that more and more people prefer the cakes as they are made at their request and fetch low prices.

However, the cakes’ quality depends on the makers, Hang noted.

Although its homemade mooncakes are packed carefully and supplied in a large volume, a representative of M.T. mooncake producing unit in Thu Duc City frankly admitted that sales are mainly based on buyers’ confidence.

“My business is small, so it is rarely inspected and I have not applied for the product quality certification," the representative added.

Tran Thi Minh Hanh from Hoan My Saigon Hospital was concerned that consumers may face risks due to mooncakes of unclear origin and quality.

According to many experts, buyers should purchase homemade mooncakes when they know and have the basis to trust the producers.

The Mid-Autumn Festival, falling on the 15th day of the eighth month in the lunar calendar, is an occasion for family reunions. Mooncakes are often sold one to two months before the festival to serve the demand of consumers.

However, the price and quality of the cakes constitute a big concern among consumers.