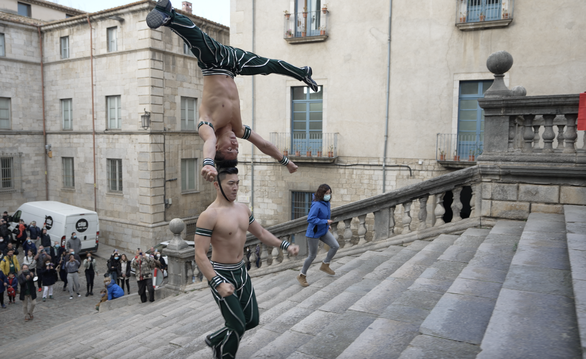 The two Vietnamese acrobats Giang Brothers have received a cash reward of US$44,000 from a Vietnamese company upon breaking their own world record for head-to-head stair climbing at the Cathedral of Girona in Spain last week.

The cash was offered right at the church by Hung Thinh Corporation, a leading real estate enterprise in Vietnam, after the two daredevils, Giang Quoc Co, 37, and Giang Quoc Nghiep, 31, had climbed 100 church steps in 53 seconds while doing a head-to-head balancing act – a feat that shattered their own world record set five years ago.

Hong Phuong, Co’s wife, said that a Hung Thinh representative contacted her after the duo pulled off their feat to congratulate and offer the cash reward, which equals to around VND1 billion ($44,000).

“We congratulate and thank you for your great performance that helps Vietnam proudly gain one more glorious place in the Guinness World Records book,” Thanh Nien (Young People) newspaper cited the Hung Thinh representative as saying when presenting the reward to the Giang Brothers.

The acrobatic brothers thanked Hung Thinh for the unexpected cash bonus and expressed their hope that they will accompany the business group and other organizations in activities that aim to spread Vietnam's cultural values in the future.

“This victory, this honor belongs to everyone," Thanh Nien cited one of the two brothers as saying.

"We hope that today’s success will contribute to spreading positive energy and encouraging everybody in the world in general and Vietnam in particular to strive to overcome difficulties.”

The Giang Brothers’ head-to-head stair climb, which started at 1:00 pm CET, or 7:00 pm Vietnam, on December 23, was done in response to an invitation of the Spain-based Circus Arts Foundation.

The pair flew to Spain on December 17 and faced some challenges in practicing due to frigid temperatures and slippery stairs.

However, when the weather got warmer, they were able to conquer 100 steps while doing a headstand in just 53 seconds, breaking the record they set in 2016, when they climbed 90 steps in 52 seconds in a head-to-head balance performance.

After the record-breaking night, the Vietnamese brothers have become very busy with a hectic work schedule for various activities in Spain.

Along with many cultural exchanges, they will also take part in festive activities to celebrate the New Year in Spain organized by the World Records Organization in collaboration with a company specializing in circus performances.

These activities will take place in various areas in Girona and Barcelona.

The two brothers are expected to leave Spain on January 3 and arrive in Vietnam a day later.

Co and Nghiep have won several international circus prizes over the past years.

Three years ago, Vietnam’s Giang Brothers also earned a reputation for themselves over daredevil gymnastics routines that booked them a spot amongst the finalists of Britain’s Got Talent 2018.