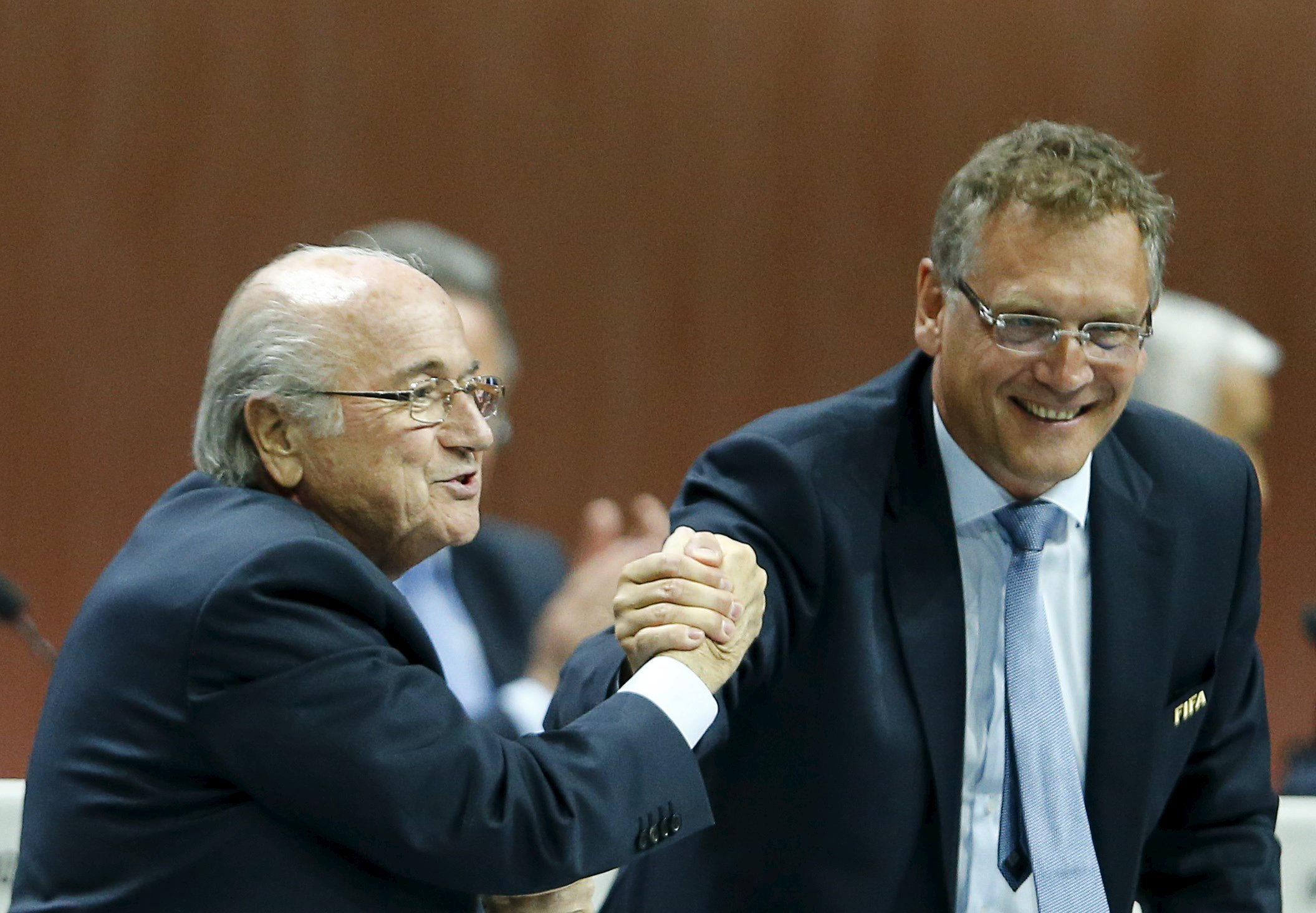 Blatter recently retained Richard Cullen, the chairman of the law firm McGuireWoods and a former U.S. federal prosecutor, said a person familiar with the matter who spoke to Reuters on the condition of anonymity.

Swiss Attorney General Michael Lauber told journalists he would not rule out interviewing Blatter and Valcke, although Switzerland had so far targeted no individuals.

Switzerland, where FIFA is based, announced its criminal investigation and seized computers at FIFA headquarters last month on the same day that the United Statesrevealed indictments of nine soccer officials and five businessmen as part of a separate probe into corruption.

"We are faced with a complex investigation with many international implications," Lauber said in his first public comments since his office obtained the computer data last month.

"The world of football needs to be patient. By its nature, this investigation will take more than the legendary 90 minutes," he said, referring to the length of a soccer match.

U.S. prosecutors have not accused Blatter of wrongdoing. Among the issues the Federal Bureau of Investigation is examining is Blatter's stewardship of FIFA, sources have said.

U.S. prosecutors believe that Valcke was involved in $10 million in FIFA bank transactions that are a key part of the investigation, a source said in early June. He also has not been accused of wrongdoing.

FIFA's ethics committee confirmed it was conducting its own investigation into individuals suspected of breaking the rules in relation to bidding for the right to host the 2018 and 2022 World Cups, which were granted to Russia and Qatar respectively.

It said it was prepared to investigate more suspects and take on extra staff if needed.

On Wednesday, Ricardo Teixeira, the former head of the Brazilian Football Confederation (CBF), said he got "absolutely nothing" in return for his vote to awardQatar the rights to host the 2022 World Cup and described suggestions he was involved in impropriety as "preposterous."

Switzerland's third-largest listed bank, Julius Baer , said on Wednesday it had launched an internal investigation in connection with FIFA. It said it was cooperating with the authorities and did not say when its own probe had begun.

Blatter was re-elected to a controversial fifth term just two days after the probes became public. He announced the following week that he would step down and a new presidential election would be held between December and February.

In a related development, suspended Asian Football Confederation (AFC) general secretary Alex Soosay quit on Wednesday rather than fight to clear his name amid allegations he tried to interfere with an anti-corruption probe of the regional governing body.

Soosay was suspended last month by the AFC after Malaysian media reported an official at the 46-member confederation had been asked by Soosay to "tamper or hide" documents during a 2012 external audit.

Bin Hammam was once set to challenge Blatter for the FIFA presidency but was banned for his part in a cash-for-votes scandal.

Swiss authorities have said their criminal investigation specifically targets the decisions to stage the 2018 and 2022 World Cups. Both Russia and Qatar deny wrongdoing and say they are preparing to hold the tournaments as scheduled.

Asked whether the Swiss investigation could derail Russia's plans, Lauber said that decision was not his problem.

Lauber said his work was completely independent of the ongoing U.S. cases. WhileSwitzerland had received and fulfilled a request for legal assistance from the United States, it had not asked for any such help in return, he added.

His investigation was looking closely at material generated by Michael Garcia, an American lawyer hired by FIFA to investigate ethics violations who spent years examining the Russia and Qatar bids.

Garcia's report has never been published and FIFA has released only a summary which exonerated the Russian and Qatari bids of serious wrongdoing.

Garcia quit saying the summary mischaracterised his report. However, it resulted in proceedings being opened against unnamed individuals which his successor Cornel Borbely said he has continued.

"The (ethics committee) is carrying out several proceedings into football officials on suspicion of breach of the FIFA Code of Ethics based on the findings of the investigation into the decision for the 2018 and 2022 World Cups," Borbely said in a statement.

"Should new evidence come to light, the investigatory chamber will widen the group of suspects. (It) is prepared to increase its staff numbers at any time if needed."

Lauber said the U.S. authorities had not asked for Garcia's report.

Lauber said his office had seized nine terabytes of data, the size of the printed collection of the U.S. Library of Congress.

He said he had no complaints about FIFA's cooperation to date. FIFA said in a statement that the Swiss investigation was based on a complaint that it had made itself last November.

"FIFA is cooperating fully as an injured party in the actions by Swiss authorities," it said.

"FIFA itself instigated these proceedings in November 2014 when it presented the file on the 2018/2022 FIFA World Cup bidding process to the Swiss Office of the Attorney General."