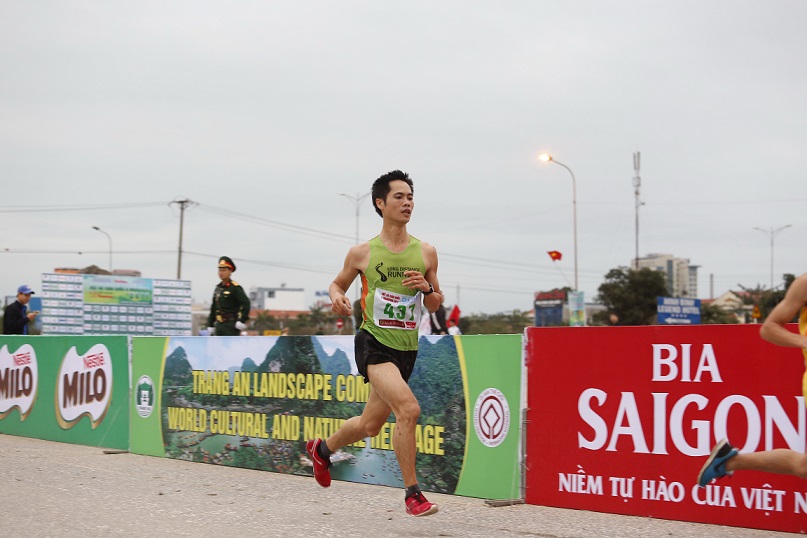 Many amateur marathon athletes in Vietnam have astonished others with their achievements which are thought to only be obtained by the professional.

Opting for the sport for better heath, these marathoners have never stopped pushing their limits with their burning passion and relentless training.

Pham Duy Cuong, one of over 6,000 members of the Long Distance Runners (LDR), a club for marathon lovers in northern Vietnam, found himself falling in love with the sport after trying it eight months ago.

Being an owner of a private business, Cuong had always been loyal to football as a way to keep him active and fit.

The man was aware of a running competition in Sa Pa, a mountainous tourist town in the northern region, through his friends on Facebook who participated in the event.

“I really admired them and wished that I could attain such an achievement,” Cuong recounted, adding that he started practicing marathon in August last year.

One month later, he gave his first shot at the 42-kilometer marathon in Sa Pa, which took him 10 hours and 20 minutes to complete.

Following his eight months of playing the sport, Cuong has taken part in ten 42-kilometer marathons and many other races with a shorter distance.

Cuong’s most recent endeavor was his participation in a running tourney in Barcelona on March 12.

According to the marathoner, he runs about 11 or 12 kilometers every morning before going to work.

The regular training has helped him lose eight kilograms and brought many changes to his body and mind.

Cuong is set to participate in the IRONMAN 70.3 Vietnam, a triathlon held in the central city of Dang Nang as a qualifier for the coming worldwide championship, on May 7 and a marathon to the Everest in Nepal on May 29.

“I will break my own record after completing those races,” he remarked.

Pham Hong Hai, a teacher at the Hanoi National University of Education, at first decided to practice running to lose some weight.

Hai is 175 centimeters tall but previously weighed 93 kilograms. He said that his attempts to trim down in the gym had not proved affective.

The teacher later picked marathon as his primary sport and managed to lose some 20 kilograms after one year.

Hai admitted that he had been overweight, which had caused many health problems.

Cao Ngoc Ha, a Hanoi resident, has become a renowned face after snatching the silver medal at the Vietnam Mountain Marathon Sapa 2016 with his record of finishing a 100-kilometer race in 15 hours 36 minutes.

To Ha, running is just a hobby as he first took up the sport about three years ago.

“After working in the U.S. for two years, I returned to Vietnam in 2013 and discovered that there were many running clubs in the country. I decided to join the LDR and run about 100 kilometers every week,” Ha said.

The amateur athlete runs for about one hour every weekday morning, with the intensity greatly raised during the weekend.

In order to prepare for his 100-kilometer race, Ha often practices running for 10 hours a day.

Ha only sleeps for four to five hours a day as he saves the rest of his time for family and his passion for running.

“Overcoming such challenges has taught me to keep moving forward in life,” he said.

In 2017, he intends to partake in a 70-kilometer run in the northern province of Vinh Phuc in June, a 100-kilometer race in Sa Pa in September, and another 100-kilomemter competition in Hong Kong or Malaysia in November.