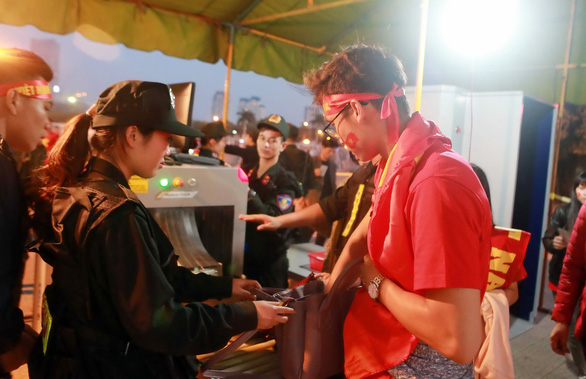 Security will be beefed up at My Dinh National Stadium in Hanoi, where Vietnam will host Malaysia for the 2022 FIFA World Cup’s Asian qualifier on Thursday, according to the match organizers.

The match organizers held two separate meetings, the latest taking place on October 3 with the attendance of representatives of the Ministry of Public Security, Hanoi’s police, Vietnam's General Department of Sports and Physical Training, Vietnam Football Federation, and management board of the stadium, to discuss specific security measures.

Accordingly, the top priority is given to ensuring security and safety for both the hosts and visitors.

The organizers have pledged to resolutely prevent the entrance and burning of such dangerous objects as flares and firecrackers in the stadium.

Specifically, electronic screening equipment will be installed at four gates to prevent spectators from bringing dangerous objects into the stadium.

In addition, a previously-installed system of 30 surveillance cameras in the stands will be used to support the security work, while officers will also carry cameras in their hands as they patrol around different areas inside the venue.

The organizers also call on fans to show support in a civilized manner.

As 1,000 Malaysian supporters are expected to show up at the 40,000-seat My Dinh Stadium, while the host fans will fill the rest, they are advised to not parade on the streets in Hanoi before and after the game and to arrive early at the venue to help prevent congestion.

Thursday’s match will be Vietnam’s second Group G game in the second round of the Asian section of the 2022 FIFA World Cup qualification.

During the qualifying round, six first round winners and 34 teams, ranking 1st to 34th in Asia, are divided into eight groups of five sides to play home-and-away round-robin matches.

Alongside Vietnam and Malaysia, Thailand, Indonesia, and the UAE make the Group G.

Last month, Vietnam and Thailand settled for a goalless draw in their Group opener in Bangkok.

After the match against Malaysia, Vietnam will play the other three games during the Asian section of 2022 FIFA World Cup qualification by year-end.