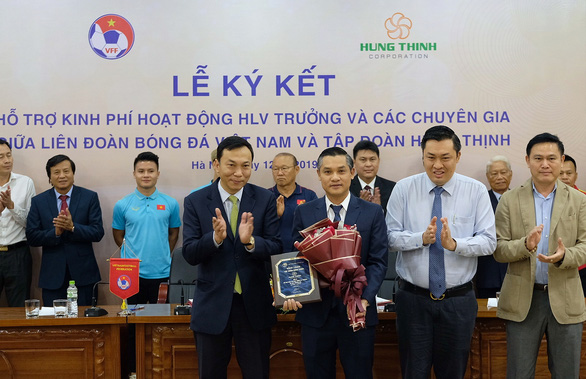 Hung Thinh will be among the sponsors to provide funds for the VFF to pay the salary of Park and Vietnam’s other football pundits in the next three years.

On November 11, the VFF and Park signed a new contract that lasts three years from 2020.

Under the new contract, Park will be paid US$50,000 monthly in after-tax salary, a record-high payment of all time for a football manager in Vietnam, to coach both the country’s national football team and under-22 squad from 2020 to 2022.

Hung Thinh agrees to provide the VFF with an undisclosed large amount of money to pay that salary, in the hope of promoting the development of Vietnamese football. A part of that amount will be used to remunerate foreign football experts working for Vietnam.

“This sponsorship for Vietnamese football is considered the corporation’s responsibility toward our country’s sports,” said Nguyen Van Cuong, deputy board chairman of Hung Thinh Corporation, at the signing ceremony.

“Hung Thinh will never demand anything in return from the VFF even though this is very big funding.

“The corporation expects Vietnam to win the gold medal in men’s football at the upcoming Southeast Asian [SEA] Games and to qualify for the finals of the FIFA World Cup in 2022 or 2026.

“The VFF hopes that this push from Hung Thinh Corporation right ahead of the 30th SEA Games will inspire our national football teams to play confidently and finely finish their job,” Anh said.

The 30th SEA Games will take place in the Philippines from November 30 to December 11. As a unified country, Vietnam has never struck gold in men’s football at the Games since 1975.

Hung Thinh has awarded about VND10 billion ($431,079) to Vietnamese football over the past years, despite having never helped pay the head coach of the national team before, Cuong said.

At the signing ceremony on Tuesday, Hung Thinh Corporation rewarded the national team and star player Nguyen Quang Hai with VND1.2 billion ($51,736 ) in total for beating Malaysia 1-0 in a 2022 FIFA World Cup qualifier at My Dinh National Stadium in Hanoi on October 10. Hai scored an acrobatic winner in that game.

Asked Hung Thinh or multifaceted Vingroup would be the main sponsor to pay Park, as the VFF had once announced that the latter was among the donors, Cao Van Chong, deputy chairman in charge of media at the VFF, answered that the funds will be provided by both corporations.

The corporation has become one of the prominent donors for Vietnamese football in recent years.

Since 2018, Hung Thinh has awarded tens of billions of Vietnamese dong to Park and Vietnamese football.

The corporation hopes its newest sponsorship deal will help ease pressure on the state budget and the VFF in paying the South Korean coach and other experts, playing a role in taking Vietnam’s football to a new level.

Hung Thinh says it expects impressive results from Vietnamese football and at the same time the sport’s part in creating a source of positive energy for everyone in Vietnam.

Park has been considered a sorcerer since he accepted the Vietnam job in late 2017.

During his spell, Vietnam historically finished second at the under-23 Asian championship in January last year, claimed the fourth-place of the Asian Games tournament in August, and most remarkably, won the trophy of the ASEAN Football Federation (AFF) Cup in December.