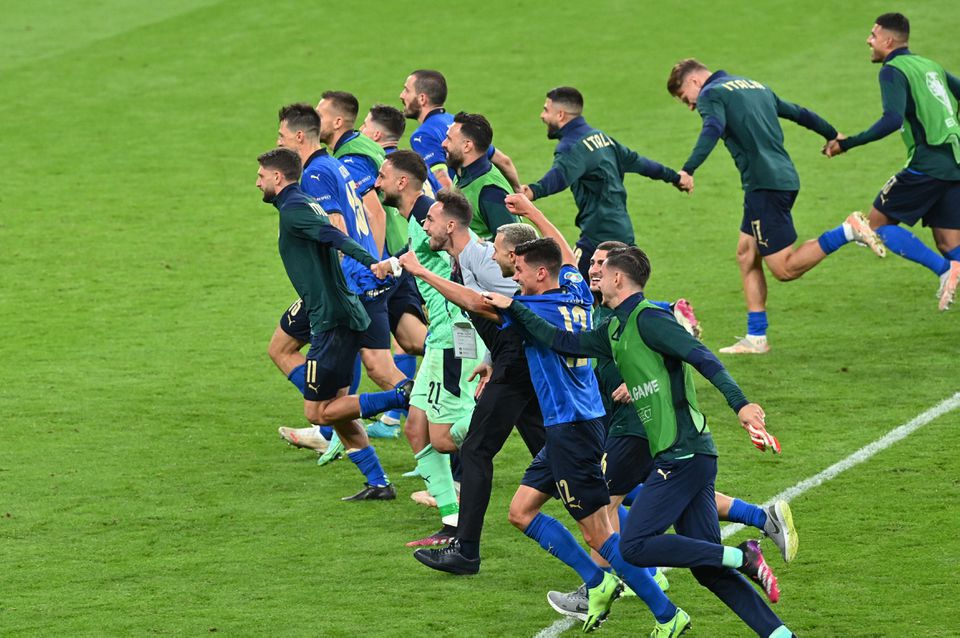 Substitute Federico Chiesa carried on a slice of family history when he struck in Italy's 2-1 extra-time win over Austria in the last 16 at Euro 2020 on Saturday as Roberto Mancini's side drew on the collective to reach the quarter-finals.

The 23-year-old, whose strike was added to by fellow substitute Matteo Pessina to complete the victory, is the son of former Italy striker Enrico Chiesa who scored against the Czech Republic in Euro '96 at Liverpool's Anfield ground.

However, while Chiesa Sr's side bowed out at the group stage in that tournament, Federico and his team mates are on their way to a quarter-final in Munich against either Belgium or Portugal after a battling win over their obdurate Austrian opponents.

In their bid to return to Wembley for the final on July 11 and lift their first European Championship trophy since 1968, Mancini has already used 25 of his 26 players, showing the depth and breadth of talent available.

Though Italy flattered in the group stage, winning all three games without conceding to continue their unbeaten run going back to September 2018, they found a formidable opponent in the dogged Austrians.

Franco Foda's side completed 19 tackles in the match and made nine blocks as Italy forwards Lorenzo Insigne, Ciro Immobile and Domenico Berardi all struggled to find space or chances to shoot at goal.

By the end of the 120 minutes played at Wembley, all three had been brought off with Mancini reluctant to make changes until midway through the second half of regulation time.

Chiesa, who had starred in Italy's final group win over Wales, was brought on after 84 minutes for Berardi and did not take long to find his touch.

The Juventus player's excellent strike after five minutes of extra time where he brilliantly tapped a bouncing ball down to his left foot to smash home from a tight angle. It was his 13th strike this year for club and country.

The fact that Chiesa and Pessina, who got the winner against Wales, were two of the five substitutions made by Mancini shows not just the quality the manager has to call on but that it will take every drop of sweat to take Italy to the title.

They also had to withstand a late Austrian onslaught after Sasa Kalajdzic had given his side hope with six minutes remaining. But Italy held firm to take their unbeaten run to 31 games - a national record.

Mancini has spoken of there being 26 first-choice players in his squad and, while before there may have been discontent with rotation from game to game, the COVID-19 enforced change that allows five substitutions means more chances for players to shine.

"The substitutes made the difference for us, but everybody gave their best tonight," he said. "I'm happy because the lads gave everything to win even when we were tired."

The hard-fought victory over Austria was Italy's first proper test of their tag as one of the favourites, especially as it was their first match at this tournament away from Rome.

However, it appears that even away from the Colosseum this squad of 26 gladiators may have what it takes to conquer Europe.