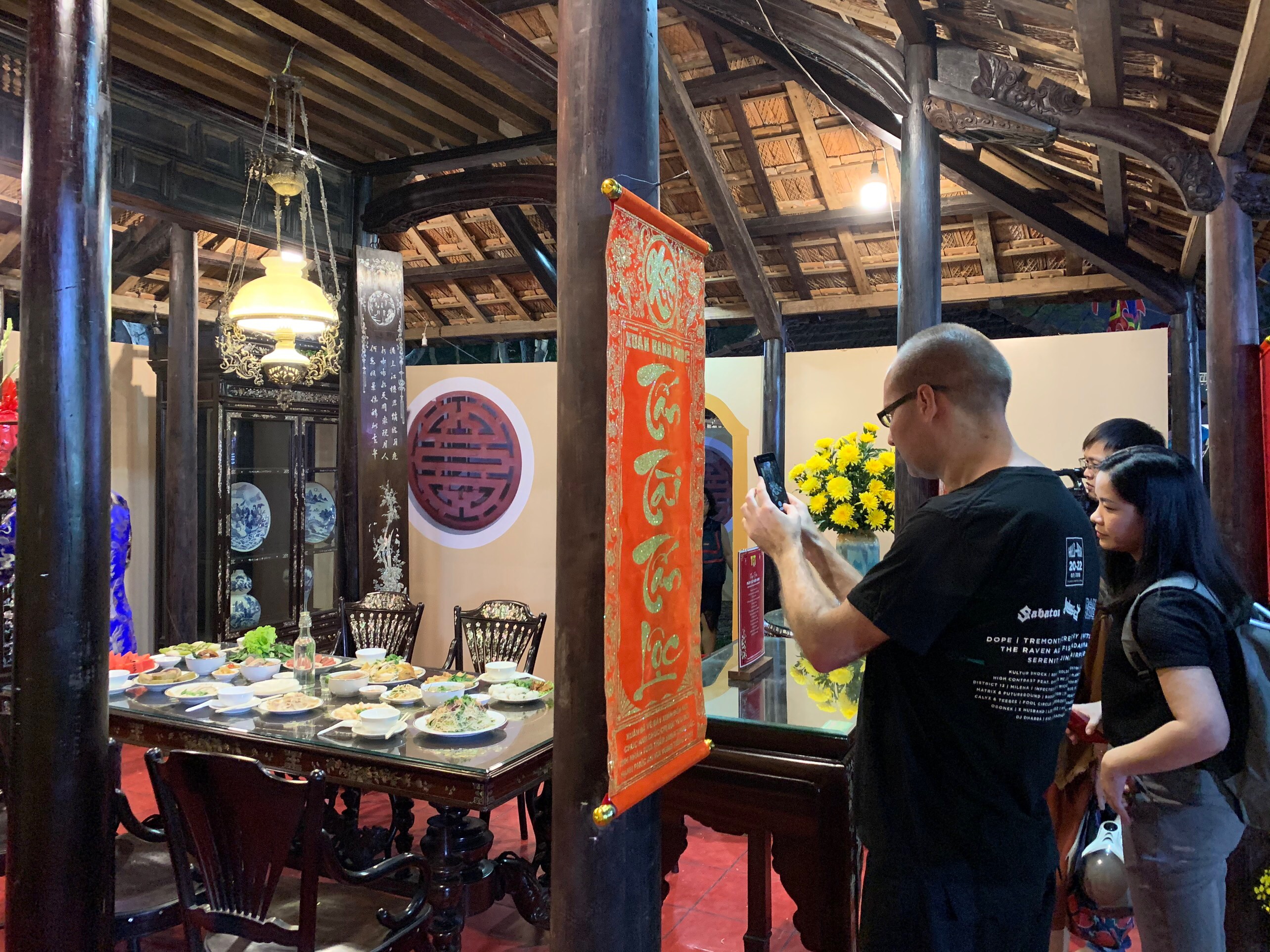 Hristo Ganev from Bulgaria was among a number of foreign visitors at the Tet Festival 2020 at Le Van Tam Park in Ho Chi Minh City’s District 1 this weekend.

Despite his regular trips to the Vietnamese southern city during the past ten years, the 39-year-old Bulgarian said he had never experienced Tet before.

“A Vietnamese friend of mine texted me there was an interesting festival near her workplace and took me here,” Ganev told Tuoi Tre News at the event jointly held by the city’s Department of Tourism and the Vietnam Cuisine Culture Association.

The three-day festival, the first of its kind, lasted from Friday until Sunday and aimed to honor Vietnamese cultural and culinary values, as well as create opportunities for visitors to understand the holiday’s traditional customs and the meaning behind Tet.

Tet, or Lunar New Year holiday, is considered the most important festival of the Vietnamese people.

The holiday will fall on January 25 this year, with preparation and celebration typically taking place a week before and after the date.

‘A good way to promote Tet’

Accompanied by two of his Vietnamese friends, Hristo Ganev spent time at the festival’s ancient houses area which displays meals traditionally eaten during Tet by people in northern, central, and southern Vietnam

The houses were also decorated with traditional Tet theme.

“The meals look really nice and seem to be well-made,” Ganev commented.

“I can realize the differences between the Tet meals of people living in different regions,” he added.

Ganev’s friend Diem Thuy said she wanted to bring him to the event so that he could experience first-hand how Tet is celebrated in Vietnam.

With the same thought, Hoang Thu Nga, 41, also brought her American friend to the event.

“I wanted to show her how Vietnamese Tet is, and also its bustling atmosphere,” Nga explained, adding that the festival is a good way to promote Tet to foreigners who had little knowledge of the Vietnamese holiday.

Nga knew she had succeeded when her friend Patricia Alford expressed amazement after getting to know all information about Tet, tasting Tet foods like bánh chưng (a Tet traditional cake made from sticky rice, mung bean, and pork), and listening to Vietnamese traditional music.

“A lot of people [the organizers] are very proud of what they are doing [and] everyone is happy to share formation,” she commented.

“I’ve stayed in Ho Chi Minh City for three weeks and seen people decorating the streets with those flowers. I love it. It reminds me of spring coming alive,” she expressed.

Alford said the only thing that made her unhappy about the experience was that she forgot to wear her traditional Vietnamese long gown ao dai to the event.

“I see people wearing it everywhere. The costume is very flattering, feminine, [and] it makes the women look graceful. I love it and I also have one,” she said.

“I should have worn it today.”

The three-day festival has not only attracted local people but also the city’s first-time visitors who could not stop themselves from dropping by the colorfully decorated Le Van Tam Park to see what was happening.

Hanna Tomaszewska and a friend from Poland was among those. The two are making a trip across Vietnam in 17 days.

“We’re walking around and saw this so we decided to take a look,” the 30-year-old visitor said.

“I love the way people decorate the festival with yellow and red flowers, as I’ve heard those are lucky colors in Tet,” she added.

Meanwhile, 23-year-old Daniel Matthews from England was drawn to the festival by the smell of the street food stalls.

“My hotel was across the street and I come here to try some Vietnamese foods. I love street food,” he said.

The festival was also where German Joachim Feiden and his wife Petra Kessler sat down on a small bamboo chair, sipped a beer, tried some BBQ, and reviewed their first trip to Vietnam.

“We are not young anymore, and one day when we were both over 60, we told each other ‘let’s go to Vietnam’,” Feiden recalled the couple’s decision.

Before coming to the Southeast Asian country, Feiden said he knew almost nothing about the country he was going to visit.

But now his head was “full of impression.”

The couple arrived in Ho Chi Minh City a day before the festival took place and decided to stop by the event while walking around their hotel area.

“The food here is good,” Petra Kessler commented, knocking her head when her husband said they would spend two hours exploring the festival.

The couple was also sad that they have to leave Vietnam before Tet, but decided that they would come back someday.