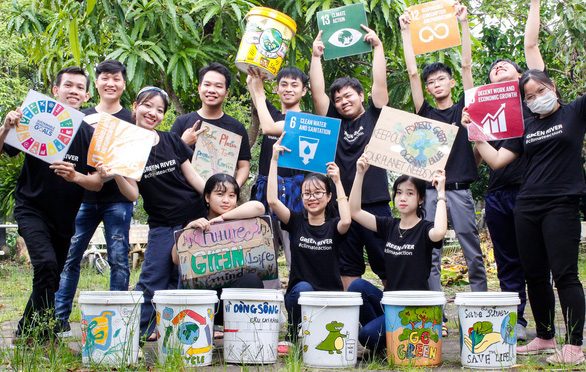 Cai Rang Floating Market in Vietnam’s Mekong Delta is the cleanest it has ever been thanks to a group of devoted young people.

As a Mekong Delta native, Nguyen Hoang Son, 21, a student at the University of Economics Ho Chi Minh City, spent much of his childhood tagging along with his parents as they sold fruit from their boat at a local floating market.

A nostalgia for those easier, cleaner days on the river prompted Son to gather a group of friends and set his sights on tidying up plastic waste in local waters.

Together, the group decided to launch their mission with a clean-up of Cai Rang Floating Market – a vibrant tourist attraction in the Mekong Delta city of Can Tho.

In 2019, the Vietnam Climate Leadership Initiative (VCLI) program was co-organized by the United Nations Children's Fund (UNICEF), the Center of Hands-on Actions and Networking for Growth and Environment (CHANGE), and the Saigon Innovation Hub under the Ho Chi Minh City Department of Science and Technology.

The group quickly realized they shared the same desire to clean Vietnam’s rivers and decided to launch Green River – an initiative focused on providing technology-based solutions to the country’s water pollution problem.

In June 2020, the group officially launched their first project – cleaning the Cai Rang River by donating recycling bins to businesses and households along the river, hanging banners along the river to raise environmental awareness, and using remote-controlled vehicles to collect garbage from the waterway.

Though the project came to an end in November, the group has been in touch with vendors at the local market who are not shy about expressing their gratitude.

“Many of the vendors are quite interested in issues relating to the environment and truly understand what our project is all about,” Son said.

“The main problem is that they feel they don’t have the tools to protect the environment.”

The design for the drone was developed by Thai Anh, who works as a computer science lecturer at Can Tho University.

The microchip for the vehicle was made by Fablab Can Tho.

In total, the drone cost VND7 million (US$304), the entirety of which was funded by UNICEF.

The garbage collecting drone is made from about 40 percent recycled materials such as old gears, second-hand iron frames, and used engines.

Once connected to a smartphone, the machine unwinds a roll of mesh material to pull plastic waste into a trash container.

It took the group three months to finish the machine.

They are currently working on a second one which they hope will have improved functionality.

“For the second version, the machine will use solar energy and 100 percent stainless steel in order to prevent corrosion," explained Son.

"It is also more compact and easier to assemble.

"The machine has an underwater monitoring camera and a high-definition camera to identify and categorize garbage.

“We avoid collecting unwanted garbage such as water hyacinth and dried tree branches, for they will overwhelm the volume of the trash container."

Son and his companions hope that the efforts of Green River will be maintained even after their project ends.

Inspiring a love for the environment

Nguyen Le Ngoc Giao, 20, a student of Can Tho University, takes part in Green River as a volunteer.

She said that Green River has helped her improve her teamwork skills and creativity.

She was inspired to join the project by her love for nature and desire for a greener and cleaner lifestyle.

“We plan to continue with the Cai Rang project for the next five years," Son revealed.

"We have also launched another project in Hoi An called Cham Green Ocean in order to address the issue of plastic waste on the Cham Islands.

“Vietnam is a country of rivers.

"We look forward to seeing greener rivers with less garbage because they are sources of life not only for animals, but also for many people."