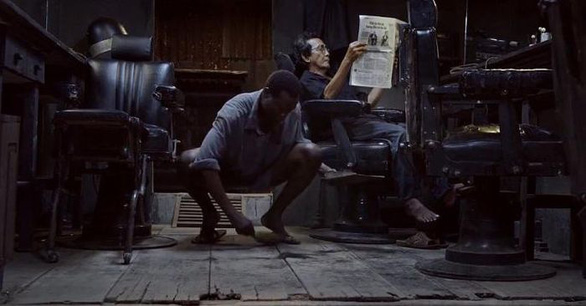 The drama ‘Vi' (Taste), the winner of the Encounters category at the 71st Berlin International Film Festival, has been explicitly banned from public screening in Vietnam, according to a decision by the Vietnam Cinema Department under the Ministry of Culture, Sports, and Tourism.

The decision was endorsed by Vi Kien Thanh, head of the Vietnam Cinema Department, on Monday.

It was settled on after a vetting process that collected opinions from the Central Council on Film Evaluation and other culture agencies, Thanh stated during a discussion with Tuoi Tre (Youth) newspaper.

The official cited nude scenes, including full-frontal ones, that last over ten minutes as grounds for the ban.

He pointed to a sequence of the film where four middle-aged, working-class women and one Nigerian footballer are seen walking and dining inside a house naked.

Thanh said he had no criticism on the general messages of the movie, even recognizing its novel artistic directions, but the full-frontal scenes, which are considered 'in conflict with Vietnamese and Asian cultures' and violating Vietnam’s Law on Cinema, made the whole work a 'lost cause.'

Meanwhile, film director Nguyen Hoang Diep, a new member of the Central Council on Film Evaluation, spoke highly of the movie and its director Le Bao.

Having observed the movie’s progress since its inception in 2015, Diep was convinced enough to extol Le Bao as one of the most talented and creative young directors in Vietnam, who figured out a ‘splendid’ cinematic language for himself.

Earlier in April, the producers of ‘Vi' were fined VND35 million (US$1,513) by the Ministry of Culture, Sports, and Tourism for submitting the movie without a publishing permit to the Berlin International Film Festival 2021.

‘Vi’ is the debut feature film of director Le Bao, which was produced by Le Bien Pictures and Singapore-based E&W Films.

The 97-minute flick tells the story of a Nigerian footballer who goes to Vietnam for a professional career, but has to move in with four middle-aged Vietnamese women after his team is liquidated.

The Encounters section, in which ‘Vi’ won the Special Jury Award, was created to support new voices in cinema and make room for diverse narrative and documentary forms.

In 2020, Vietnamese drama film 'Rom' was also slapped with a fine of VND40 million ($1,739) for joining the Busan International Film Festival (BIFF) without first acquiring a screening permit at home.

The fine came months after the movie won the top award at the competition.

However, unlike 'Vi,' producers of ‘Rom’ managed to show a version of the film, which was said to be heavily censored, in domestic cinemas.