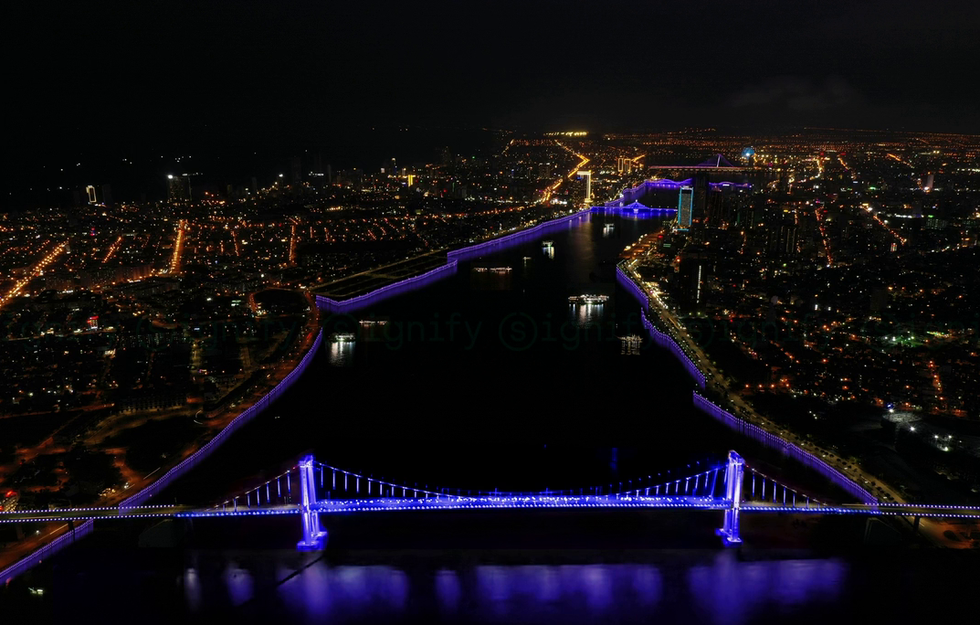 The Han River and all bridges over it in Da Nang will become a great stage of lighting art, a spectacular landscape to locals and visitors at night, thanks to the large-scale artistic lighting designs that have been completed.

The project will create comprehensive changes to the existing artistic lighting systems that cover the entire river area, including the bridges, the riverside, and the water surface, perform large-scale artistic light shows at night under the theme of 'River of Light.'

As per the new designs, an artistic lighting system will be installed for Nguyen Van Troi Bridge while the existing illuminations will be renovated for the Thuan Phuoc, Han, Rong, and Tran Thi Ly Bidges.

At the same time, art light networks will be set up on the embankments and railings alongside the river from the Thuan Phuoc Bridge to the Nguyen Van Troi Bridge.

Urban landscapes along the both banks of the river and riverside parks will also be illuminated.

All lighting systems of the project will be connected and controlled via the Internet using the Interact Landmark software, which makes it easy to perform artistic light shows from anywhere, according to Da Nang newspaper.

All related costs are estimated at VND110 billion (US$4.83 million), the newspaper said.

The construction department has yet to provide a timeline for the project.

At a conference held on January 5 to review tourism in 2021, Tran Phuoc Son, deputy chairman of the city’s administration urged the acceleration of all major tourism-related projects including the ‘River of Light.’

The ‘River of Light’ and other local attractions will contribute to improving locals’ spiritual life and serve as attractive tourism products for domestic and foreign tourists, chairman of the city’s government Le Trung Chinh said when attending the inauguration ceremony for the APEC Statue Park expansion works on January 10.