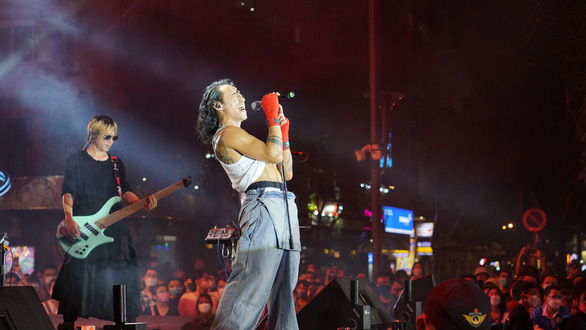 The Show Vietnam and the organizers of Vietnam Book and Reading Culture Day collaborated to put on the event.

The rock show was organized in one day with little promotion, but it drew prominent Vietnamese rockers such as Pham Anh Khoa, Metanoia, and An Nam Band.

Spectators, both young and old, rock fans, and first-time listeners filled a large portion of the pedestrian street.

An Nam Band opened the night with songs infused with national spirit, following the band's choice to strengthen a unique path by incorporating culture and history into rock and conveying the emotions of the nation's heroic historical imprint.

Following An Nam Band's performance is Metanoia, the band that won first place in the Rock Viet TV show.

The stage was filling up, and the cheers were growing louder and louder as Metanoia Band's lead singer Tho Trauma delivered a vibrant and impressive gig.

Despite the fact that it was founded at the end of 2020, Metanoia has attracted well-known names in the Vietnamese rock music scene such as Tho Trauma, Cuong Nhoc, Lit Marley, and Ha Tra Da.

They create an unmistakable, trendy band, reaching out to the audience so that those who have never heard rock can feel this music, which is not as harsh or rough as they believe.

After the collaboration performance with Metanoia, Vietnamese rock singer Pham Anh Khoa continued to explode on stage, keeping the stage packed until the last minute of the show.

"It makes no difference to me whether I'm standing on stage with one or 10,000 spectators," said Cuong Nhoc, Metanoia's drummer.

"I will continue to give my best performance."

The music night ended with Khoa's singing and the harmony of over a thousand spectators.