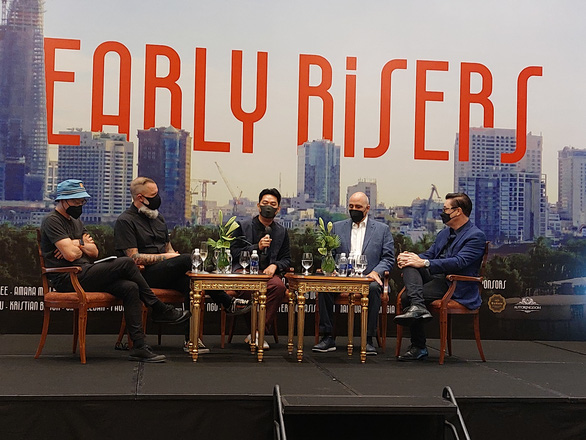 The life of foreigners in Vietnam will be featured through a humorous lens in a TV film series, ‘Early Risers,’ which will first be aired locally before being introduced internationally, its producer has said.

Early Risers is the first English-language TV film project funded and produced by Ho Chi Minh City-based Ace1 Picture Corporation, which will coordinate with the U.S.-based Creative Artists Agency (CAA) for international release of the film.

The TV series will have eight to ten episodes, 30 minutes long each, depicting the life of foreigners in Vietnam starting in 2008, when the country began to be home to many foreigners who came to live and work.

The film conveys the spirit of hospitality and the will to better themselves of Ho Chi Minh City residents in particular and Vietnamese people in general.

The screenplay of the TV series was written by Vincent Ngo, a Vietnamese-American screenwriter, who is the author of the 2008 blockbuster movie 'Hancock' (in 2008), which once earned US$625 million worth of global box-office revenue.

Early Risers is expected to air on the VTV9 television channel in Vietnam early next year before being introduced to the global film market.

A foreign filmmaking crew of 11 people has flown to Ho Chi Minh City to coordinate with their Vietnamese colleagues to shoot the first scenes of the TV series.

The production will be joined by many international actors, including C.S. Lee, Kristian Bruun, Amara Miller, and Omar Elba, along with their Vietnamese colleagues such as Phi Vu, Dat Phan, Paul Yen, and Kathy Uyen, among others.

Producer Peter Toumasis said he received the script by Vincent Ngo three years ago and he has now started working on it after a period of preparation.

The TV series will not only tell the stories of Vietnam but also introduce Vietnamese culture and people to the world, said Chieu Man Tuan, director of Ace1 Picture Corporation.

“After producing the first two episodes of the TV series, we will introduce them to some other countries, in the hope that Early Risers will help Vietnamese films expand their shares in the international market,” Tuan said.