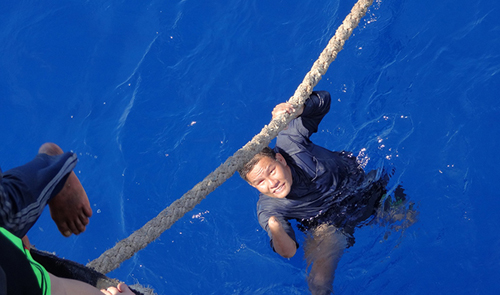 “Everyone is afraid of death, but even more frightening is the prospect of living as an invalid, unable to do anything correctly,” said Bui Van Chung, 28, who lost an eye and a part of his right arm in an accident offshore in 2010.

The accident was one of many adversities Chung has faced in his life. However, difficulties cannot keep him from his dreams, as he has an unbeatable desire to work hard and earn an honest living.

Living in Tay (West) Hamlet, An Hai Commune of the island district Ly Son in the central province of Quang Ngai, Chung has been nicknamed by locals the ‘Ly Son otter.’

Despite losing an eye and a part of his right arm, he has trained himself in diving and is the only diver on Ly Son working as a fisherman.

“Upon hearing of the accident that claimed Chung’s eye and hand, no one could predict that Chung would overcome his disabilities to continue working in the Hoang Sa (Paracel) archipelago as a fisherman,” said Nguyen Quoc Chinh, chairman of the An Hai Fisheries Association on Ly Son.

“The courage of this young man is truly admirable,” he added.

Lien, the mother of Chung, pointed toward a reef off Ly Son to indicate where Chung was currently diving to catch fish.

“He’s an odd guy—he escaped death several days ago when his fishing boat burst into flames in the sea waters off Hoang Sa but continues to enter the sea without fear.”

On June 9, Chung and 15 other fishermen jumped into the sea to escape a fire on the fishing boat QNg 96084.

“I have 13 years of experience of eating with waves and sleeping with winds, so I consider the incident normal,” Chung said.

He is a hard working and strong man but it seems that fate is constantly testing him.

He has borrowed money from banks and friends to build three different boats to go out to the open sea, but he lost all three boats to typhoons or the Chinese authorities.

He always told himself after an accident, “Better luck next time. I don’t fear anything because I am young.”

He learned how to persevere when he was young and living in poverty.

Despite having a good academic record, he had to leave school when he was in ninth grade. Most fishing families on Ly Son suffered a poor sea crop that year.

It was difficult to see creditors demanding debts from his parents, and so he decided to stop going to school in order to find a job to help his family, he recalled.

“It was the saddest time in my life,” Chung said, lifting his eyes toward the open sea. He began his life as a fisherman at 15.

From that moment, he dreamt of owning a fishing boat and began working hard to save enough money for one.

Going out to sea with an eye and a hand

After his accident, Chung floated in the water for two and a half days before being taken to a hospital. Doctors informed him that he had lost an eye and part of his right arm had to be amputated because of infection.

“I wanted to die when I thought of a life without the sea,” Chung said.

But his instinct to survive took over and he trained himself how to dive and catch fish with only one hand within a year.

In the middle of 2011, he was invited to join a fishing boat owned by a local man, Nguyen Chi Thanh.

“I gave him the opportunity so he could have more friends and enjoy himself. But he surprised us because he could catch more fish than a normal fisherman,” Thanh said, smiling.

Later, Chung was invited to help build a fishing boat.

Now, Chung is well known as a diver, able to go 60-70m beneath the surface of the sea.

“My efforts and dreams of owning a boat make me happy with my life,” Chung admitted.

However, the man with one eye and one hand has not yet convinced his girlfriend’s parents of his worth—they do not want their daughter to marry a man with physical disabilities.

​​Number of international tourists in Vietnam increases in early 2018

The rise bodes well for this year’s tourist sector