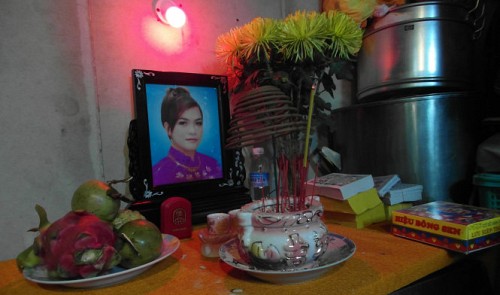 A 22-year-old Vietnamese woman was strangled to death in a hotel room in South Korean on November 30 by a local man, who handed himself in to police after committing the crime, local police reported. >> Vietnamese bride found dead in valley in South Korea

On December 1, 2014, the Vietnamese Embassy in South Korea notified the Immigration Department in Ho Chi Minh City of the death of Nguyen Thi Thanh Ngan, a Vietnamese woman who was killed at 3 am at room 208 of a hotel in Jeju on Sunday.

According of South Korean police, Ngan got married to Kim Hyun Jun on April 26, 2012 and the couple went to South Korea in June 2012. Ngan and her husband divorced later but she still stayed in South Korea.

After her divorce, through introduction, Ngan got acquainted with a South Korea man, named Kim Hee Cheol, 41, on November 30.

After drinking liquor with four friends at a bar, Kim Hee Cheol and Ngan came to the said hotel, where the man strangled her to death.

After killing the woman, the man called 119 to inform the killing and asked for emergency medical help but Ngan had died.

The man later handed himself to police who are investigating his motive of killing the woman.

The man committed the murder when he was relatively drunk, police said.

Ngan’s family said that the woman had not returned to Vietnam after traveling to South Korea and seldom got in contact with her family.

According to Ngan’s relatives, her husband decided to divorce her after knowing that she could not bear children.

After leaving her husband’s house in Jeju, Ngan lived on the support of her Vietnamese friends in South Korea and were seeking a job, her family said.

Nguyen Ngoc Minh, 60, Ngan’s father, said, “The Vietnamese Embassy in South Korea has informed us of Ngan’s death and asked us to go to Korea to receive her body at our expense.”