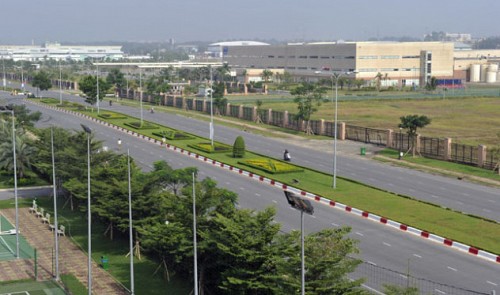 Jabil Circuit and the management board of the Saigon Hi-Tech Park signed Tuesday a memorandum of understanding that will allow the U.S. firm to expand its investment in Ho Chi Minh City’s technology hub.

The Florida-based firm, which provides design, engineering manufacturing and supply chain solutions, began operations at the hi-tech park in April 2007.

The company currently occupies more than 27,000 square meters of building space and employs 2,600 employees there, with annual growth of about 50 percent over the last five years, according to a press release obtained by Tuoi Tre News.

The memorandum will allow for additional investments to expand Jabil’s existing operations in Vietnam, with a new facility expected to occupy up to 93,000 square meters of land.

The new facility, slated for groundbreaking in 2017, will focus on high-volume production for computing, storage, networking, telecommunications, automotive, digital home, mobility, point of sale, printing, industrial and energy sectors, according to Jabil.

The MoU was inked in San Jose, California, as part of a series of activities of a delegation from Ho Chi Minh City, led by the city’s Party Secretary, Le Thanh Hai, in the U.S.

Jabil did not elaborate on how much the additional investment would be, but Vietnamese media said the figure could be as high as $500 million, citing sources from the Saigon Hi-Tech Park.

“The Vietnamese government’s support for our expansion was critical and marks an important new milestone for Jabil in Vietnam and greater Asia,” Alessandro Parimbelli, Executive Vice President & Chief Executive Officer, Enterprise & Infrastructure with Jabil, said at the signing ceremony.

“As we continue to expand our services for customers in the region, we are also helping to support the growth and economic strength of Ho Chi Minh City and Vietnam.”

He indicated that Jabil’s goal is to increase the percentage of skilled Vietnamese professionals by creating more than 3,000 new jobs in the local area over the next five years.

The investment expansion in Vietnam will grant several important benefits to Jabil, including access to a large pool of industrious workers, mid-level engineers and managers, according to the U.S. company.

Vietnam also offers favorable labor costs in a robust economy that has grown at a rate of six percent for the last four quarters, driven by the high-tech manufacturing sector.

The company can also enjoy the tax incentives, reasonable land lease costs and a strategic location to attract technology companies offered by the Saigon Hi-Tech Park.

Jabil, which has 90 facilities in 24 countries and 180,000 employees worldwide, supplies comprehensive services to electronics and technology companies in a broad range of industries.