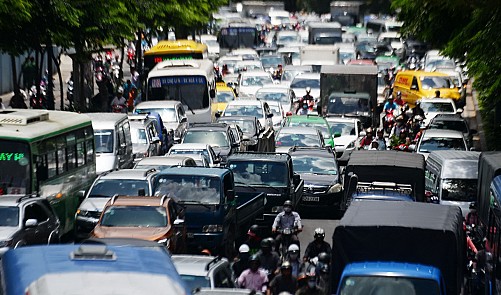 As the ongoing debate on a possible motorbike ban in Vietnamese cities picks up momentum, a traffic expert has weighed in with his assertion that cars are contributing more to the problem than motorbikes.

On Monday last week, Hanoi’s Department of Transport unveiled itsplan to restrict non-resident motorbikes from entering the capital by 2025, sparking a debate on whether or not banning motorbikes would ease Vietnamese cities’ chronic traffic congestion.

One of the first to offer their views on the issue was Luong Hoai Nam, economic expert and former CEO at Vietnam-based low-cost airline Jetstar Pacific, who vocally supported the ban in an interview with Tuoi Tre (Youth) newspaper published last Thursday.

According to traffic expert Lam Thieu Quan, two-thirds of the road surface in major cities where traffic congestion is widespread are occupied by cars, while motorbikes only take up a third.

Therefore, Quan said, a ban on private motorbikes would not necessarily ease congestion, while it would likely pose a challenge for a large population of low-income families who are using bikes in their daily commute.

The expert asserted that buses in Vietnam are being “surrounded” by not only motorbikes but also cars, the number of which has seen a rapid growth rate in recent years.

He suggested a gradual ban on private cars, beginning with restrictions at rush hour while opening up priority lanes for buses on city roads.

Buses in Vietnam are not officially categorized as prioritized vehicles, and therefore are often blamed for their chronic unpunctuality in the rush hour.

According to Quan, punctual buses would convince commuters to give up their private motorbikes, making it easier to impose restrictions and bans on the vehicles.

The restriction on cars should also be coupled with financial measures such as charging cars entering the city center during high-traffic hours, and the collected money should be reinvested in developing public transport instead of being remitted to the government budget, the expert suggested.

He also pointed out the obsolescence of Ho Chi Minh City’s public transport planning until 2025, which was drafted in 2009 using outdated data but was only submitted for feedback to the municipal Fatherland Front a few months ago.