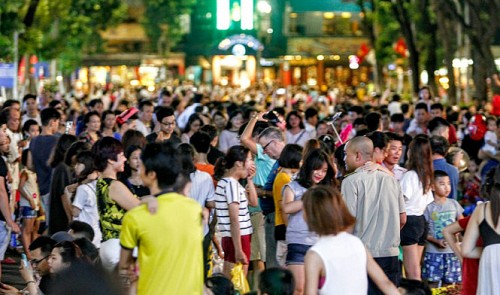 The ban will be applicable to groups or individuals that make too much noise during performances, or those who do not report the content of their show to the municipal culture and sports department for approval, departmental head To Van Dong said on Sunday.

The culture department therefore decided to inspect activities in the area last week.

During their first patrol on Sunday night, the department’s inspectors found some performance groups to be making too much noise or performing at inappropriate locations.

However, those performers were warned rather than fined.

Dong said that while performers are not required to seek official permits, the culture department still orders that they be informed beforehand.

“We need to know what the performances will be about, where they will take place and whether they contravene appropriate noise levels, all to ensure that their activities will not affect the lives of nearby residents,” Dong explained.

The department's director added that in the longer term, his agency will have an official set of rules for street performers.

“In the immediate term, groups or individuals that repeat their mistakes more than twice will be banned from performing on the walking street,” he underlined.

The walking street near Ho Guom was opened to the public on September 2, on the occasion of Vietnam’s National Day.

Numerous street artists and performers have quickly turned the new venue into an opportunity to showcase their skills to the public.

While some performers may not be happy with the decision by the culture department, others agree that performances on the walking street should be under the control of authorities.

“In France, street artists are first required to perform in front of authorities in order to be permitted to then perform to the public,” claimed Nguyen Quang Long, a regular performer on the walking street.