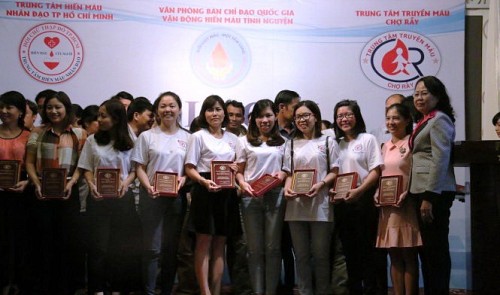 Nearly 200 people in Vietnam with the rare Rh- blood type have registered for a local donor club to readily answer any emergency calls for life-saving blood transfusions.

The Rare Blood Club was established in 2001 by the Blood Donation Center of Ho Chi Minh City for people with the extremely rare Rh- blood type in Vietnam to be at-the-ready in case their blood is needed for emergency medical use.

From its initial 12 members, the club now has grown to 198 active members, most of whom are labor workers, barely able to feed themselves yet willing to give away their precious blood to save lives.

Le Van Long, 45, a construction worker in Ho Chi Minh City has been a frequent blood donor for the past 20 years.

Long found out about his rare blood type in 1996, and has donated blood, without fail, on a tri-annual basis.

“That doesn’t include the many times when I was called in for emergency blood transfusions,” Long said, referring to cases when there was no blood readily available for a patient in need.

Long, like many other members of the club, has become a “living blood bank,” as referred to by Dr. Pham Van Quan, deputy director of the Ho Chi Minh City Blood Donation Center.

“Whenever there was a call from the center, they are willing to put aside their personal errands to donate blood to much-needed patients,” Quan said.

According to Quan, apart from Ho Chi Minh City, members of the club are scattered across many southern Vietnamese provinces such as Dong Nai, Binh Duong, Binh Phuoc, Tay Ninh, and Ba Ria – Vung Tau.

For some members such as Tran Thi Loan, of Binh Phuoc Province, joining the club was a way of paying it forward after her life was saved by blood from a donor.

Four years ago, Loan experienced complications during labor. She and her child only made it through the operation alive because of a timely blood transfusion.

“I have been a member of the club since,” Loan said. “Apart from regular blood donations, I join my fellow club members in raising public awareness and encouraging those with the rare blood type to become donors as well.”