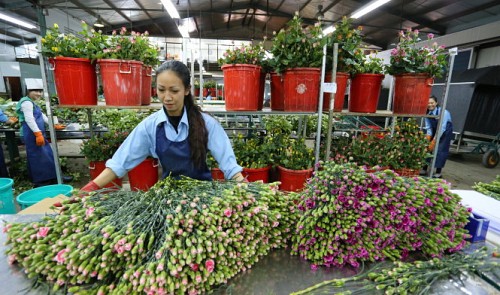 Officials in the Central Highlands city of Da Lat and Ho Chi Minh City are planning to operate two separate flower exchange centers in 2018 to spur the development of horticulture, with an ambitious goal for flower auctions also set for the two places.

In Da Lat, the flower exchange center will be built at the end of the Mimosa Pass, about 10km from the heart of the resort city, near Don Duong District, which is a hub of flowers and vegetables in Lam Dong Province.

As planned, the center will occupy 16.6 hectares and receive flowers from Da Lat and its neighborhoods to process and transport to other places.

The center will deliver flowers to its counterpart in Ho Chi Minh City as well.

The Da Lat flower exchange center is meant to take orders from buyers and gather flower data from growers in order to finalize and sign purchase contracts, with support from technology.

Flowers will be delivered from the center to smaller markets or florists upon request. The next orders and their payments will be handed over to the center in Da Lat in the next cycle.

This flower business is modeled on that at the Ota market in Tokyo.

Ota Market first opened its doors in 1989, according to its website.

The market now moves an enormous volume of items through its warehouses on a daily basis, including around 3,600 tons of produce and nearly 33 tons of aquatic products. The on-site flower market is currently among the largest in Japan.

Susumu Kiryu, president of Ota Floriculture Research Institute Ltd., said the most important point in running the Ota market is payment transparency so growers are always kept posted during the process.

Flower growers normally cannot decide on their prices or are poorly informed of them, selling the plants via intermediaries, Kiryu added.

“Cost will drop by at least 1.5 times thanks to this type of market,” he said.

The two flower exchange centers are expected to come on stream in 2018. Flower auctions will be organized at the two centers after they have become fully and effectively operational.

Statistics show that Da Lat produces over 2.5 billion flower stems annually, most of which are exported or sold to Ho Chi Minh City, where 90 percent of the flowers bought come from the highland city.