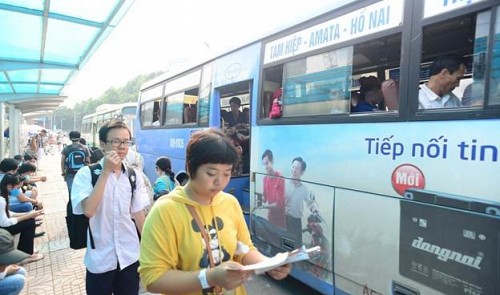 Ben Thanh bus station to be relocated next week

If you travel by bus in Ho Chi Minh City this weekend it will be your last chance to hop off at the main station fronting Ben Thanh Market in District 1.

The Ben Thanh bus terminal is scheduled for relocation to nearby Ham Nghi Street this Monday to free-up space for the construction of the city’s first metro line.

The relocation, however, is not expected to affect bus operations, considering the new terminal is only 200 meters away.

Ham Nghi is a wide two-way avenue with three car lanes in each direction, running from the Saigon River to Quach Thi Trang Square.

The new bus station will be built on two of the car lanes and feature six bus stops and a public restroom. Temporary installments will be placed on the site to meet the April 10 deadline before official amenities are constructed in June.

The Ben Thanh bus station was built in 1956 and has since remained one of Ho Chi Minh City’s most important, and iconic, transportation hubs.

The terminal management center has tasked bus drivers and attendants with informing passengers of the relocation.

A subway terminal and 515 meter underground tunnel is zoned for construction underneath the area where Ben Thanh market and the bus station currently sit.

The concrete Quach Thi Trang roundabout was removed earlier this year to serve the subway project.