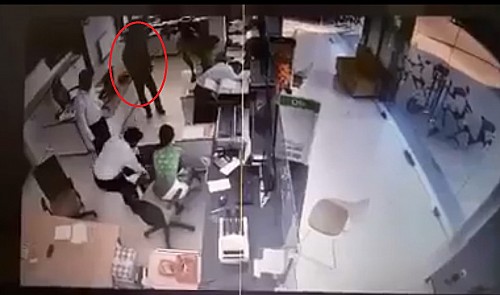 A masked man threatening tellers with an alleged gun robbed US$100,000 worth of USD and VND from a Vietcombank branch in southern Vietnam on Wednesday.

Police are still searching for the unidentified robber, with the Ministry of Public Security having vowed to aid local authorities in the investigation.

According to Colonel Huynh Van Khoi, chief of staff and spokesperson for the police department of Tra Vinh Province, the robbery occurred at 4:30 pm on Wednesday at a local branch of Vietcombank in the province’s Duyen Hai District.

A man wearing a hoodie and facemask reportedly entered the bank and threatened its tellers with what appeared to be a gun.

The robber then fled the scene on a red and black Yamaha Sirius motorbike with a still unidentified license plate number.

The Duyen Hai District Vietcombank branch had only been in operation for a little over two months when the robbery occurred.

Tra Vinh Police say it is not yet clear whether or not the thief’s ‘weapon’ was indeed a real gun.

At 9:00 pm the same day, police were still investigating the scene and collecting witness statements.

The investigation also includes a thorough search of local hotels and lodging houses to attempt a trace of the robber’s whereabouts before and after the crime.

Speaking with Tuoi Tre (Youth) newspaper late Wednesday, the Ministry of Public Security said it will dispatch investigative officers to aid the local police in their search for the criminal.

Vietcombank is Vietnam’s fourth-largest commercial bank in terms of total assets, which were posted at VND677.56 trillion ($30.25 billion) in 2016.