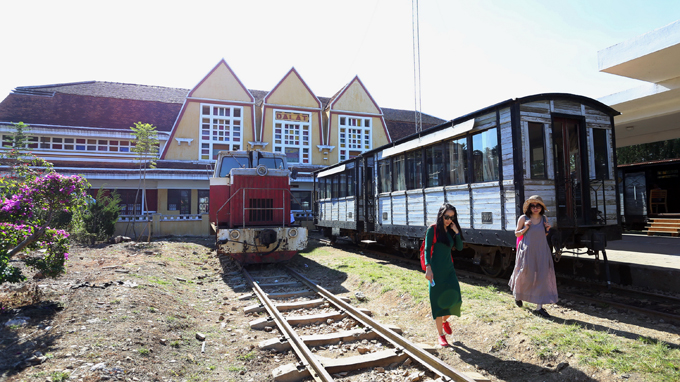 The 76-year-old Da Lat Railway Station, a national relic, will undergo a restoration process under a plan recently approved by the Ministry of Culture, Sports, and Tourism of Lam Dong Province.

The project will earmark VND22 billion (US$1.04 million) for the restoration of the French-built iconic station in the Central Highlands city. The provincial government has also backed Vietnam Railways to be the investor of the restoration project.

Vietnam Railways is the current operator of the railway station which was designed in 1932 by French architects Moncet and Reveron, and opened in 1938.

The station will have its terminal, repairing facilities, and other units restored.

However, it is unclear when the restoration will start and finish.

Dalat Railway Station is the first station on the Phan Rang – Da Lat route, and is considered “the station at the highest altitude of Vietnam” as it sits 1,500m above sea level.

But it is now an interesting tourism destination where visitors can take what could be the country’s shortest rail route from Dalat to Trai Mat, which used to be the retreat camp of Vietnam’s last king, Bao Dai.

On the seven-km rail route departing from Dalat Railway Station, tourists can enjoy a splendid view of some of Dalat’s spectacles, a worthwhile and relaxing experience.

At Trai Mat station, the train stops for about 30 minutes so that tourists can take a leisurely stroll around the local market or pay a visit to the nearby Linh Phuoc pagoda.

In related news, local government has also green-lighted a project to restore and preserve the Cat Tien relic in Lam Dong Province.

From now to 2017, the provincial state budget will allocate VND38 billion ($1.8 million) for excavation tasks at the archaeological site.

The Cat Tien archaeological site was accidentally discovered in 1985, with many artifacts concentrated in Lam Dong.

The unknown civilization that developed this site inhabited it between the 4th and 9th centuries AD.