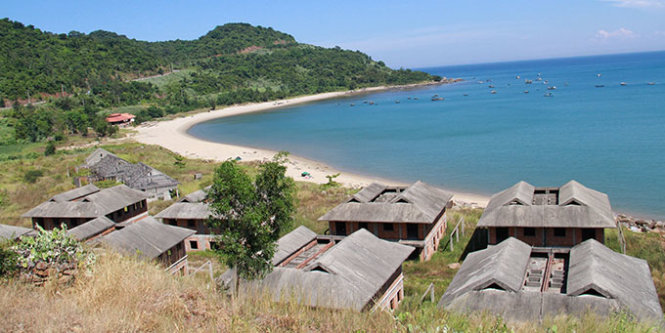 What are beaches for but sunbathing and swimming? The answer you get from some resort developers in the central city of Da Nang is that these are places to start building projects and leave them unfinished for ages.

Many developers have tried to obtain land plots along the beautiful beaches in the central tourism hub with promising resort projects, but what they actually do is turn them into construction sites that never seem to be finished.

The 30km-long beach from the Son Tra peninsula in Da Nang to Cua Dai in nearby Hoi An City of Quang Nam Province is considered the best of its kind in central Vietnam, but it is also where the most uncompleted resort projects are located.

In 2005 Hai Duy JSC and Invesco, two companies based in Ho Chi Minh City, were licensed to break ground on their Bai But Bay Resort in Son Tra.

The 30-hectare project, with a registered capital of US$30 million, is expected to become a paradise for tourists. But the best the developers could do in building the “heaven” is a block of houses and an artificial lake behind a dull brick wall.

Da Nang authorities have issued many ‘ultimatums,’ threatening to revoke the investment license for the project, but the developers remain stubborn.

Many other resort projects, including Sontra Travel, Anvie Danang, The Song – Danang Beach Villas, and Non Nuoc Resort, are also occupying dozens of hectares along the Da Nang beaches, while whether or not they will be finished remain a mystery.

In the meantime, these unfinished construction sites are blocking the way to the beaches from locals and tourists. They thus have to flock to a few public beaches, leaving these places overcrowded.

There are currently 18 sluggish resort projects dotting the beaches in Da Nang, according to a report by the city’s administration.

“Da Nang has created favorable conditions for the developers but they have left these seaside projects unfinished for years,” Nguyen Dieu, director of the local Department of Natural Resources and Environment, admitted.

“We have also repeatedly issued ultimatums to them but things remain unchanged.”

Dieu said the developers refuse to complete their seaside projects not only because of the frozen realty market, but also the unstable tourist arrival numbers.

He also admitted that some developers are waiting for the right time to transfer their projects, or the land plots they are allocated.

These developers, however, will be dealt a tougher hand in the future, Tran Tho, secretary of the city’s Party Committee, underlined.

“Whenever we threaten to take tough measures, the companies criticize us for not sharing their hardship, but our tolerance is limited,” he said.

“It is unacceptable that they get the land and wait for the chance to transfer it [to reap profits].”

Da Nang will inspect all of the seaside projects in the city and will strictly punish developers who misuse or do nothing to the land plots they are assigned.

“A company will lose the land it is granted if it fails to do what is committed in the investment license.”