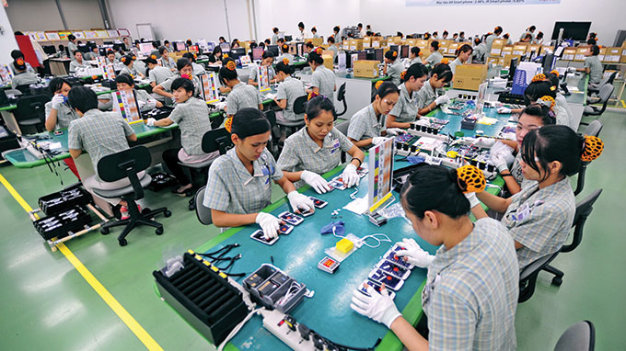 Vietnam was one of the fastest growing economies in Asia in 2014, and manufacturing has been the key driver, much of which can be attributed to the electronics industry, according to a recent report by Singapore-based DBS Bank Ltd.

The electronics cluster has grown rapidly in recent years, which has resulted in an expansion of 78 percent per year in exports for the past four years to reach US$35 billion in 2014, DBS Bank said in “Sparking Life into the Vietnamese Electronics Sector,” released on July 2.

By the end of last year, electronics shipments by Vietnam had accounted for 23 percent of all exports, up from only five percent four years earlier.

Meanwhile, the industry has become a key driver of the economy, making up 23.4 percent of GDP last year, up from just 5.2 percent in 2010.

Vietnam’s electronics industry is quickly catching up with the regional powerhouses after a boom began post-2010 due to a confluence of factors, including the structural shift in regional electronics supply chains, the report said.

The Southeast Asian country has captured market share from many of its regional peers following a process seen repeatedly in Asia: earlier players saw income and wages rise, opening the door for lower cost producers.

Faced with weak global demand and persistent cost pressure, many manufacturers were searching for cheaper locations from which to produce.

In addition, competition was intensifying, making the need to restructure the supply chain even more compelling.

High-tech electronics producers are establishing a presence in Vietnam, evidenced by Intel, LG, Panasonic and Microsoft being among the global tech giants to have expanded in the country in recent years, marking a shift away from China.

In addition, beyond the cost advantage, geography also plays a role.

Given Vietnam’s proximity to China, it is easier for the Southeast Asian country to integrate into existing supply chains.

Korean electronics giant Samsung announced late last year an investment of $3 billion in a new smartphone factory, alongside its existing $3 billion plant, located in the north of the country, which is close to China.

Among the earnings of $1 trillion in export revenue in 2014 of eight main Asian electronics exporters, including China, Taiwan, South Korea, Malaysia, Thailand, Singapore, the Philippine and Vietnam, the last country accounted for 3.5 percent of the total, up from a mere 0.4 percent in 2010.

Vietnam has leapfrogged the Philippines and Thailand, and will likely overtake Singapore to become the fifth largest electronics exporter in the region over the next two years, and this trend is likely to persist.

The proposal was sent just a few days after the tech behemoth started constructing the Samsung Electronics Complex, with a total investment of $1.4 billion, at the Saigon Hi-Tech Park (SHTP) in District 9 in late May.

Nguyen Phuong Dong, deputy director of the Ho Chi Minh City Department of Industry and Trade, after receiving the written proposal by Samsung, organized a meeting with potential suppliers in the city and formed a list of companies with the ability to provide on-demand products for the tech firm to consider.

However, Le Bich Loan, deputy head of the SHTP Management Board, said after several rounds of work, more than 100 companies was shortlisted by one-third.

And then the number of candidates who passed the prequalification round of Samsung was scaled down to only 15 companies, at which Samsung will conduct field surveys for a final decision.

In the long term, as the government expects electronics exports to reach $40 billion by 2017, a modest growth rate of five percent per year would help achieve the target.

Nonetheless, the longer-term sustainability of the industry will depend on whether Vietnam can raise productivity and move up the value chain.

The influx of foreign electronics manufacturers has enabled the transfer of technology and skills.

However, the country needs to develop its own talent and supplier pool to sustain the trend.

Otherwise, electronics will only migrate to other cheaper locations, like Indonesia, Cambodia, Laos and Myanmar, which can all offer competitive alternatives to global manufacturers once wages start to rise in Vietnam.