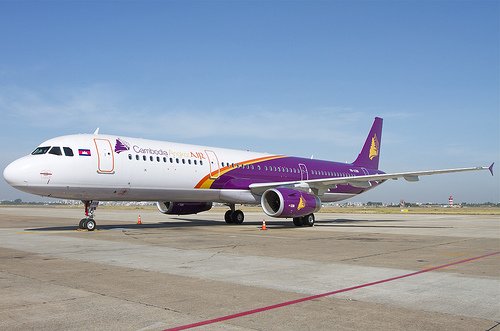 Cambodian flag carrier Angkor Air celebrated the inaugural flight on Sunday of a new service that connects the capital cities of Vietnam, Laos and Cambodia.

There will be one flight every Wednesday, Friday and Sunday from Phnom Penh to Vientiane, then to Hanoi, on the Airbus A321, according to the Civil Aviation Authority of Vietnam.

Cambodia Angkor Air, operated by a joint venture between Vietnam Airlines and the Cambodian government, also has services to other Southeast Asian destinations such as Siem Reap, Ho Chi Minh City and Bangkok.

In 2013 Cambodia Angkor Air began flying to the Chinese cities of Guangzhou and Shanghai, and has plans to spread its wings to such Asian places as Tokyo, Seoul, India, and Hong Kong.

“We cannot survive with only our local market,” Cambodia Angkor Air chairman Tekreth Samrach was quoted by The Phnom Penh Post as saying.

“We need to increase international routes and that is why we have chosen these destinations.”

The new flight leaves Phnom Penh in the morning and returns from Hanoi in the afternoon, with a connecting flight in Vientiane, according to the English-language newspaper.

Cambodia hopes to attract more visitors to the Phnom Penh-based Angkor Wat via Hanoi, which Samrach says is a hub for Chinese, Japanese and South Korean tourists.

“The route will also attract Laotians to Cambodia, as they want to see our coastal area because they don’t have one,” Samrach told The Phnom Penh Post.

The Vietnamese national carrier owns 49 percent of Cambodia Angkor Air, worth US$200 million, according to Vietnamese newswire The Saigon Times Online.

Cambodia Angkor Air, with a fleet of four Airbus 321s and two ATRs, aims to reach one million passengers this year and is likely to surpass that target, according to its chairman.