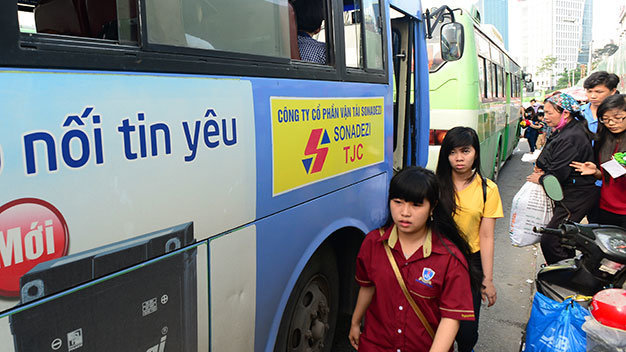 A pilot program to allow advertisements on the outside of public buses has been implemented in Ho Chi Minh City since last month, bringing a new face to the old form of public transport.

The program, which was initiated on October 21, has been piloted on ten of the city’s bus routes, including 156 buses with 40 to 80 seats each, in order to utilize the outside space of the vehicles as a source of revenue, and reduce dependence on state subsidies.

Currently city buses run with support from the government, making fares much cheaper than they really are.

The pilot program was also set up as a tool for domestic businesses to raise public awareness of their products and services, as buses are gaining in popularity amongst commuters, students and even a number of foreigners.

There are certain rules and restrictions on the advertising, however, in terms of size, colors and content in order to ensure traffic safety and urban esthetics.

The advertisements shall not be placed on the front, end or roof of buses and not cover more than 50 percent of the vehicles’ surface or block the sights of boarding passengers.

The material used should be of good quality and durable under all kinds of weather condition, according to the plan prepared by the Ho Chi Minh City Department of Transport.

Content should include the promotion of Vietnamese products and services only, and cannot be presented in red colors or any that might cause confusion with traffic signs or any illuminated material, following the regulations promulgated by the Department of Culture, Sports and Tourism.

The specific cost for each advertisement is determined after a bidding process with the price floor decided by the Department of Finance.

Many Vietnamese enterprises have expressed their interest in the program, as it will benefit their media campaigns, said Dau An Phuc, director of the Ho Chi Minh Public Passenger Management and Operation Center.

Needless to just pilot the program

There is no need to carry out such a program on a pilot basis only, for advertising on public transport means has been seen in many areas including Hanoi for decades, said Nguyen Quy Cap, vice president of the Ho Chi Minh City Advertising Association.

The sale of advertisements on buses had been prohibited in the southern city since 1992 and was the subject of several meetings over many years before it was finally approved, Cap added.

The restriction that prevents the displaying of foreign-product advertisements on buses is also inappropriate as it will significantly reduce the potential income of the project, Hai added.

The proposal was submitted ten years ago and would have helped Ho Chi Minh City earn an extra VND100 billion (US$4.462 million) per year, according to Le Trung Tin, former manager of the transport management division under the Department of Transport.