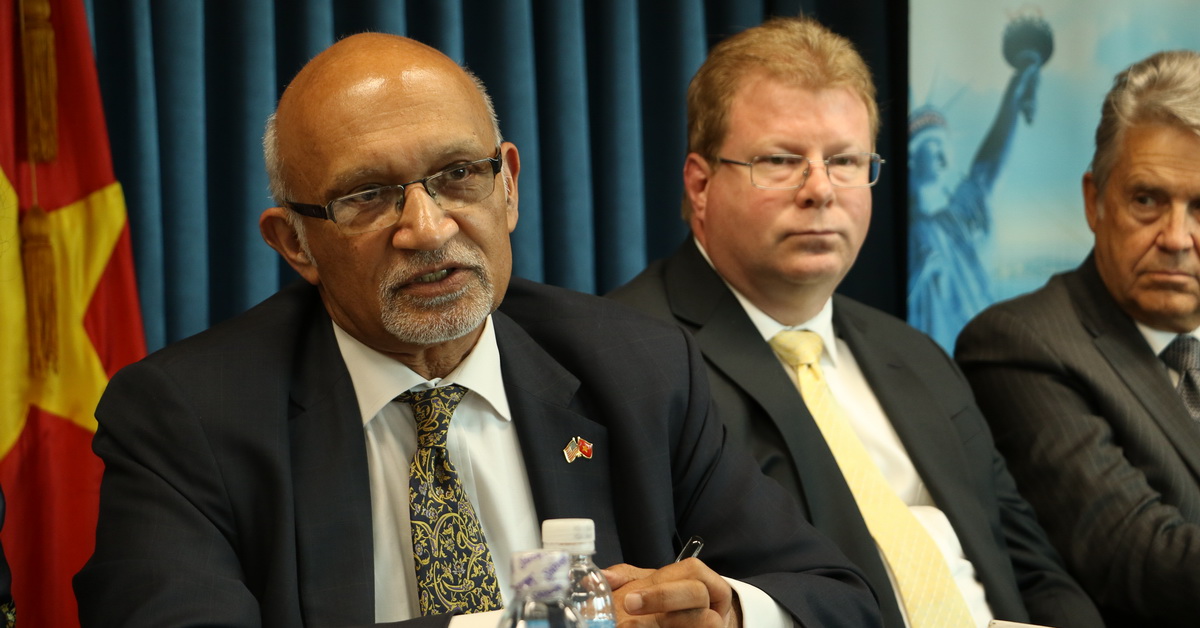 Given Vietnam’s huge demand for clean water, and the government’s need to develop water infrastructure, U.S. companies are looking at opportunities to enter and expand their operations in Vietnam, a top U.S. Department of Commerce official said on Monday.

While the need for sustainable, fresh water supply is common throughout Southeast Asia, one of the main concerns in Vietnam is untreated wastewater being released into waterways, rivers and lakes. Other issues include a lack of clean water generally, and the high loss ratio of water supplying projects.

“These all create opportunities for U.S. companies to bring cutting-edge technology to the country,” Arun Kumar, U.S. Assistant Secretary of Commerce for Global Markets and Director General of the U.S. and Foreign Commercial Service, told reporters in Ho Chi Minh City.

The assistant secretary is leading nine U.S. water infrastructure companies on a trade mission to three Southeast Asian countries, during which they hope to gain insights into the region's expanding water infrastructure market and meet with government leaders, potential partners, distributors, and end-users.

The delegation arrived in the southern Vietnamese metropolis on Monday, after first stopping in Singapore. Their final destination is the Philippines.

During remarks at a press conference later the same day, Assistant Secretary Kumar reviewed the rapidly developing trade ties between Vietnam and the U.S. over the last 20 years, and reaffirmed the potential for American companies to tap into the water infrastructure development sector.

The U.S. official, who is on his second visit to Vietnam, is upbeat about more cooperation between Vietnam and the U.S. in this field, with both parties members of the Trans-Pacific Partnership agreement.

He also recalled the historic visit of President Barack Obama in May this year to underline his strong belief in a bright future for the two countries.

Following Kumar’s speech, the nine U.S. companies, represented by their presidents and CEOs, took turns to brief reporters on the technology in water treatment and clean water supply that they are hoping to introduce to Vietnam.

In a post-meeting interview with Tuoi Tre News, Kumar elaborated on the potential for U.S. water infrastructure development companies in Vietnam, and the rising need for clean water technology and appropriate solutions across the country.

On Monday morning, the mission visited Sawaco, the city’s leading water supplier, where they learned of the company’s plans to expand their supply capacity and increase the number of projects, Kumar said.

“A number of these are projects the U.S. companies can contribute their technology and solutions to,” he said.

Kumar said Sawaco is a good example of how U.S. companies can invest here, especially when “in other parts of the country, there are a number of similar needs.”

The assistant secretary told Tuoi Tre News that once they began investing in Vietnam, U.S. companies with new technology that provide high-quality products and services will help the Vietnamese people have better water and greater access to it.

“This is such an important project, and we are very proud that U.S. companies can be part of the mission of delivering water to more parts of the population,” he told Tuoi Tre News.

As U.S. companies get more engaged in the country, they will also contribute to the local economy, he added.

Kumar reiterated that U.S. companies will bring the most modern technologies to Vietnam. “In fact some of the technologies are new in the U.S. as well,” he underlined.

“Some of the companies have been here for many years, so they know the market, but for others, they’ve come here for the first time.

“The commonality of them all is that they are very innovative.”